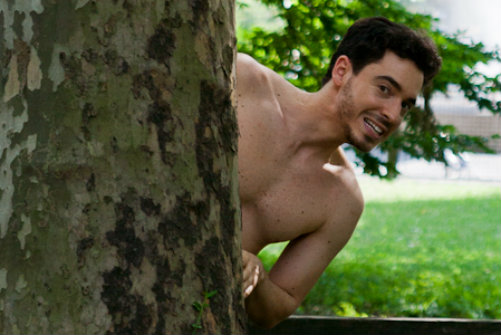 BOTTOM LINE: More than half of this one-man show may be in Gustavo Pace’s native Portuguese, but by the end the whole theater will be speaking the same language: Never give up on your dreams.

Meet Gustavo Pace, just your typical Brazilian-born law student turned New York City-actor with an MFA from Harvard. Doesn’t quite sound like anyone you’ve met before? Good, because that is precisely what Pace is counting on in his one-man show Naked Brazilian, currently performing at New York City Fringe.

In a little over an hour, Pace tells the story of his journey from being born in Rio de Janeiro to an angry, disapproving father who only wanted him to be a lawyer, to life as a successful New York actor, complete with homeless stints on Central Park benches, a homicidal landlord, and multiple mishaps in love.

As an art form, the solo show can be perilously difficult to pull off. The obvious question tends to be “Am I going to want to watch this person for more than an hour?” Are they unique or special in some way that will make me take interest in their life story? Luckily for me, Pace certainly is that.

Pace has a fun, joyous optimism that practically bursts out of his chest, and it is impossible not to like him from the moment he walks on stage. It is that same unapologetic, naïve optimism that causes many of Pace’s problems throughout the events of the play, from falling in love with a straight man to falling into an apartment scheme. Pace does a lot of “falling” in the story of his life, because he is the type of person who can whole-heartedly throw himself at a goal or situation with little to no skepticism. That fearlessness got him into Harvard University for an MFA in acting, and it is that same fearlessness which makes his one man show a success.

With nothing but a chest which serves as his all-purpose set piece, Pace is entirely alone on stage to tell his life story. And with over half the show in Pace’s native Portuguese, it is easy to see the guiding hands of director Stephen Brown-Fried on the piece, making it accessible to monolingual English speakers. Even when Pace is speaking in a different language, which he often does when imitating his father, we fully understand the sentiment and the emotion of what is being conveyed.

Lovely, specific work is done by lighting designer Ethan Steimel and sound designer Julian Evans, and these cues are executed with great timing by stage manager Kyle Largent to tell the story with no props. Subtle changes in light help Pace’s punch lines, and immediately recognizable sound effects make the use of props unnecessary in the show.

Pace’s love of his work and of life in general shines through in this heartwarming one-man show. If you need a pick-me-up, go see it before it closes.