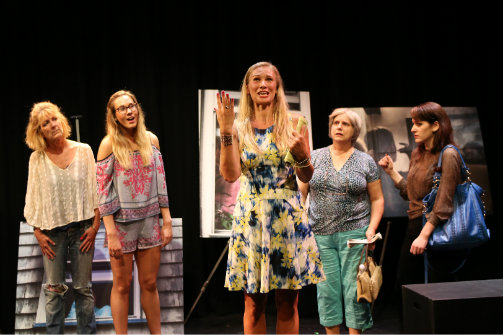 BOTTOM LINE: Based on an infamous photography exhibit, Mrs. Schrodinger’s Cat asks provocative questions about the ethics of observation and photo-documentation.

May 9, 2013: the Julie Saul Gallery opened "The Neighbors," an array of masterful photographs taken by Arne Svenson and featuring—you guessed it—his neighbors (unbeknownst to them). Needless to say, the photographs were not consensual, and Svenson’s subjects sued him for violating their privacy. Amidst the chaos emerged a crucial debate that pits freedom of speech against the right to privacy.

Mrs. Schrodinger’s Cat centers around this incident, but instead of re-performing the controversy in its exactitude, writer/director Tasha Nicole Partee has chosen to craft her own version. Partee’s script stars six women (and a seventh hilarious gallery assistant who makes a cameo in act two), a choice that proves to be essential for this retelling. Such a decision puts a gendered lens on "the lingering gaze," as if to point out how this story truly lends itself to a female perspective.

Partee focuses on two households in the suburban town of Fayette. Judith Shields (Eileen Howard) is a sweet, if sometimes amusingly dramatic, landlord who rents out part of her house to the Talbot sisters: domineering Flannery (Amelia Huckel-Bauer), flaky Delphine (Madigan Mayberry), and hot-mess-express Tia (JC Sullivan). The sisters take advantage of Judith’s kindness by not paying their rent, and Judith’s daughter Rachel (Emily Gordon Fire) is not pleased. Next door to this full house is Myrna James (Danielle Patsakos), who spends act one composing a video to her asshole husband. The two worlds collide when the Shields and Talbot families discover a neighborhood “pervert” has been secretly photographing members of the community. They suspect Myrna’s husband Travis, with his "wandering eye," as the culprit.

Partee gives us a nice visual sense of the two worlds. Stage right is the James’ household where narrow lighting suggests a confined and dreary ambiance; stage left is  Judith Shields’ front porch, where the patio furniture seems to be a direct incarnation of Judith’s effervescent personality—orange chairs, a blue bench, and red potted flowers adorn her space. I would be remiss to not mention the gorgeous photography featured in act two, taken by the talented Miriam Molnár.

At times, Partee’s direction falls short. Her prose is quite poetic, but there are missed opportunities for the rhythm of this piece to really pop. Further, the staging of a few scenes feels a bit haphazard. Though there are some directorial shortcomings, the strength of this piece lies in its writing, and the ways in which Partee refuses to take a side in the controversy at the heart of this piece.

Certainly, one might reasonably feel appalled at the idea of a surreptitious photographer capturing God knows what in the privacy of one's own home. At the same time, denying an artist the right to photograph particular subjects is censorship. But shouldn’t the subject consent to photo-documentation? But then again, informing the subject affects the outcome and changes the nature of the project. The predicament is clear: siding with one party necessarily inflicts a violation on the other.

Think again if you hope Mrs. Schrodinger’s Cat will assuage this debate. It doesn’t. And Partee’s refreshing choice to remain ambivalent and to equivocate her way through these issues is the strength of her script. And this, ladies and gentlemen, is a beautiful example of what theatre can be: the opportunity to hone and revise our moral code as we labor through questions that have no clear answer.

In its refusal to provide a solution, Mrs. Schrodinger’s Cat offers a gift to its audience: it forces us to think carefully about the intricacies of this case, to put ourselves in the shoes of each character and to ask "What would I do if it were me?"