Machine Gun America.
A play with guns. And songs.

Off Off Broadway, Musical
Runs through 8.27.16
VENUE #2: Flamboyan Theater at the Clemente, 107 Suffolk Street 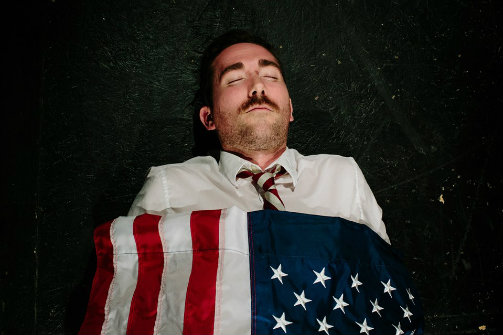 BOTTOM LINE: A hilarious pop musical takedown of the American gun lobby and the violence it enables.

As gun violence becomes an increasingly hot social and political in the United States, many Americans are becoming increasingly fed up with the problem that the seemingly all-powerful gun lobby enables. In Machine Gun America, which takes its name from an Orlando shooting range, librettist Joseph Huff-Hannon, with the help of composer John Turner and a spirited cast, offers a funny, engaging, and smart musical satire of the NRA and the social problems they help perpetuate.

The show tells the story of Bang Bang, (Tim Murray) an attendee of a “Straight Shooters Anonymous” group who fatally shot his mother with her gun as a child. Through these meetings, he falls in love with a gun-owning preschool teacher named Suzie (Emily Donald) who becomes increasingly disaffected from guns following an Uzi-related incident at work. Bang Bang, a card-carrying member of the “National Machine Gun Association,” discovers a plan by its head, Wayne (Brandon Ferraro,) an obvious parody of NRA executive Wayne LaPierre, to stop emphasizing the importance of teaching children about gun safety and to start marketing guns to children.

Nearly everything about Machine Gun America is spectacular. The pop-influenced musical numbers are catchy and hilarious. The opening song about the Eddie Eagle (Jeremy Varner) gun safety campaign is especially memorable. The acting is incredible, especially as highlighted by the schadenfreude induced by the scene in which the villain is defeated, and the plot is well-constructed and easy to follow. A few critiques: some of the singing could be stronger, including that by Ferraro and Chelsea Picken, who plays Fran, a lackey of Wayne. And Charlie Johnson’s musical staging could be improved, as the vocals get choppy and distorted at times.

Yet even with these minor issues, this brilliant anti-gun satire remains deeply enjoyable from beginning to end. Machine Gun America is certainly destined for great things, and should be championed by gun control advocates all over the country.

Machine Gun America. A play with guns. And songs. has a book by Joseph Huff-Hannon and music by John Turner. Directed by Matt Renskers. Musical Staging is by Charlie Johnson. Lighting Design is by Nate Cabana. Stage Manager is Keaton C. Grant.