By Phoebe Farber; Directed by Gama Valle
Produced by The Boom! Agenda in association with Thin Duke Productions
Part of the 2016 New York International Fringe Festival 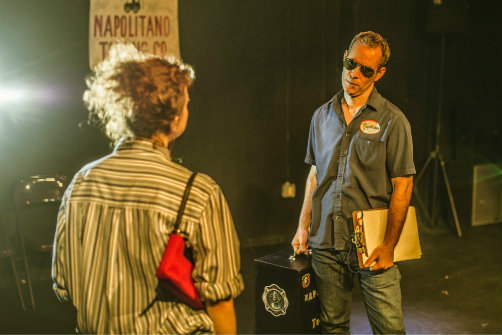 Bethany Geraghty and Philip Cruise in Jump It. Photo by Ze Castle.

BOTTOM LINE: Jump It is an entertaining and expertly executed play about family, love, and reclaiming dreams.

We all have those moments from our bygone high school days that we wish we could alter: romances that we desperately wanted to pursue; flings we regretted; stunts we would undo because they were totally idiotic and hindsight is 20/20. As three high school pals reconnect—two brothers and the popular girl that one brother dated and the other had always admired from afar—love blossoms, tensions re-emerge, and desires run wild.

Wendy (Bethany Geraghty) has a dead car battery. She has just returned from vacation with her husband and two kids, and this is the last thing she needs. When Napolitano Towing Company finally arrives, she recognizes the owner as a familiar face: Stu (Philip Cruise), the younger brother of Wendy’s high school flame Ray (Eli Ganias). Stu, Wendy, and Ray seem to revert to their high school personas as they hash out old drama: Wendy as the care-free chatterbox who gives little thought to the repercussions of her actions, Stu as the quiet underdog, and Ray as the self-absorbed jock. But each is revealed to be far more than a high school stereotype, a testament to Phoebe Farber’s deep character development and skillful treatment of tough issues. We watch these characters put their hearts on display as the story weaves its way through marital issues, struggles with mental health, and the shattering of professional aspirations.

The acting in this piece is stellar. All three are adept comics who keep us laughing and engaged. Particularly, with Geraghty’s Wendy in the lead, this production shines. Wendy has a nearly unlikable personality: she is unapologetically brash, desperate for attention, and shameless. Nonetheless, Geraghty makes Wendy enchanting with sophistication and straight-faced comedic deliveries that paint her as irresistible. One of the pure highlights of this piece is Wendy’s "bully dance" from high school, and Jump It is worth seeing if just for this plot-line. Everyone in the play seems to be obsessed with this high school moment frozen-in-time, and for good reason. Wendy choreographed and performed the routine as part of an anti-bullying campaign in high school, which, as she articulates, is completely ironic because she was the chief source of the bullying issue. It is, in fact, this charming sense of self-awareness that makes Wendy’s lack of a filter delectably inappropriate.

Director Gama Valle stages this production nicely amidst a simple set designed by Elisha Nameri: a desk upstage right serves as Stu’s office, and a makeshift car stage left is Stu’s tow truck. The truck is very cleverly realized, with two high chairs for the seats, a metal apparatus that resembles a grille, two headlights, and a bold license plate that reads “Napolitano Towing.” Valle’s direction of this piece is tight; the one unfortunate choice is the scene transition music, which is repetitive and difficult to listen to, particularly because there are many scene shifts during this 100-minute production. The show’s pace also feels a bit slow towards the end, but these are minor blips in an otherwise solid production.

Simultaneously nightmarish and fantastical, the unexpected reunion allows the trio to reminisce about who they were in high school and to rediscover who they sought to become. As what might be considered a second opportunity for these adults to "come of age," Jump It reminds us that the ghosts of our high school pasts may not be all that destructive.

Jump It is by Phoebe Farber. Directed by Gama Valle. Stage Manager is Courtney LaBossiere. Set Design is Elisha Nameri. Lighting and Sound design is by Gamma Valle. Art design is Lauren Kaiser.

The cast is Philip Cruise, Bethany Geraghty, and Eli Ganias.