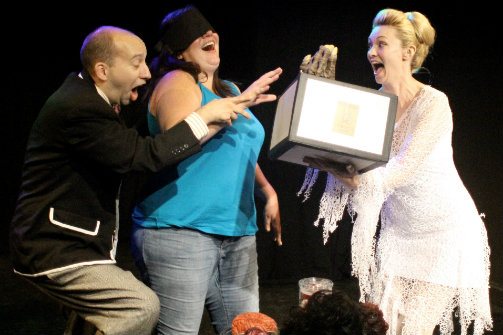 BOTTOM LINE: A campy tribute to horror-themed variety shows of the 1960s.

Not all plays require a deep, complex script as the main source of their entertainment value. Kevin P. Hale’s Humorously Horrendous Haunted Hideaway relies less on plot and more on short films, puppetry, and props. The show focuses on Ernest Headstone (Scott Michael Morales) and his vampire companion Ima Knotgoth (Aprella Godfrey Barule), both residents of the hideaway from which the show takes its name, as they try to prevent the “Blood Banshee” from killing other inhabitants of the hideaway. Aside from an unnamed actor and puppeteer credited only as “The Mad Creeper,” who plays Headstone’s intern and the many other inhabitants of the hideaway, Barule and Morales are the only members of the cast.

Some of the more memorable segments include the death of hideaway resident Jack Dromedary (an obvious parody of former Camel Cigarettes mascot Joe Camel), two short films featuring puppets, and an inverted version of the classic Halloween party game in which an audience member is blindfolded, asked to touch gross body parts, and told that they are food.

The show’s sound design by Jeanne E. Travis is well done, making extensive use of both creepy noises and retro music played on an electric organ. The many props used throughout Hideaway are well-crafted, and it's enjoyable to watch them being used. While Morales’ costume fits his character perfectly, Barule’s could have been more reminiscent of the horror genre. Despite Hideaway's strong aesthetics, more could have been done regarding the plot character development. That said, while Humorously Horrendous Haunted Hideaway is hardly a theatrical masterpiece, it certainly is fun.

The cast is Scott Michael Morales and Aprella Godfrey Barule with “The Mad Creeper.”