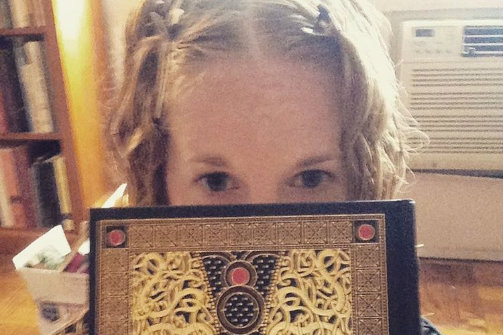 BOTTOM LINE: A funny and poignant—but not fully realized—feminist reflection on the impact of growing up in an abusive fundamentalist Christian family.

When writer-actor Brooke Arnold was seven years old, her parents became fundamentalist Christians. The impact on their two children was immediate. All but one toy, a brown teddy bear, were discarded as diabolical, and Brooke and her brother were yanked from public school and no longer allowed to play with kids unaffiliated with the Quiverfull community of College Station, Texas. Arnold’s childhood and its aftermath form the basis for her one-woman show Growing Up Fundie.

Arnold remained part of the community for 10 years, fleeing at age 17, shortly before being forced to marry Jacob, a boy she barely knew and did not like, let alone love. At the time of her leaving, she knew almost nothing about human relationships, had never been taught about sex, and had been severely abused, at one point spending three days locked without food in a utility closet. This punishment resulted from a heart-to-heart confession, in which the teen told her parents that she wanted to wait to get married. “You’re possessed by a demon,” her mom thundered. Later, Pastor Dennis and other men of the church staged an intervention to rid Arnold of willfulness and disobedience. While groping every part of her body as she lay prone on the floor, these men of the cloth shrieked and howled: “In the name of Jesus Christ we rebuke you. Get out of her Satan.”

Not surprisingly, Arnold was traumatized. At the first opportunity, she ran.

Marred by a profound lack of insight into the ways of the world, she reports that she “was a 17-year-old with a second-grade education” when she struck out on her own. It’s a horrifying confession. What’s more, since Arnold is such a charismatic and commanding performer, the magnitude of this hits the audience hard; it is from this point on, about two-thirds of the way through, that Growing Up Fundie begins to soar. Unfortunately, the opening monologue is played for laughs and, while somewhat funny, it is also a bit hackneyed and lacks the emotional depth of the more serious material that comes later. In addition, the audience leaves the theater with questions. For example, have Arnold and her family reconciled, or are they still completely estranged? How did she get to New York City? Were there way-stations between Texas and Manhattan? What were they?

“I learned a lot about sin growing up,” Arnold wrote in an author’s statement. “Now I believe that the greatest sin is silence.” Indeed, Arnold’s courage in denouncing the Quiverfull movement—and exposing the folly of its misogynist worldview—is both laudable and important. Nonetheless, the play is at its best when it delves into the residual impact of being raised in an insular bubble, rife with fear of outsiders and brimming with deprivation. When Arnold zeroes in on these truths, rather than rehashing commonly-understood facts about Christian fundamentalism, Growing Up Fundie commands attention and provokes thoughtful reflection on faith, organized religion, and male domination.

Growing Up Fundie is written and performed by Brooke Arnold. Directed by Laura Hooper. Lighting and Sound Design are by Christina Verde.