Off Off Broadway, Musical
Runs through 8.23.16
VENUE #2: Flamboyan Theater at the Clemente, 107 Suffolk Street 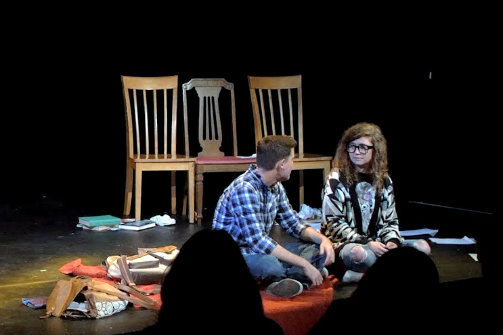 Cameron Kubly and Katie Berger in Full: The Musical. Photo by Blake Conley.

BOTTOM LINE: Full is a refreshingly honest and hopeful portrayal of trauma and grief, and the things we do to get ourselves through it.

Like her character in the Full: The Musical, Katie Berger is doing it all. She wrote the book and lyrics, as well as the music (in tandem with musical director Alan Blake Conley), and stars as Harper, a high-strung high school junior with a love for T.S. Eliot who has taken on the world. And Berger’s effort is incredibly fitting. Full, a story about struggles and celebration of self, reminds us we are our own hero, that we have the power to get us out of our darkest places. The show is an act of love, and it shows. Though not without its occasional convolution, its honesty and heart top the festival this year.

Directed by Sean Ryan Paris, Full charts Harper’s battle through trauma and her own personal demons. Following the untimely death of her father, she and her mother (Alison Burns), a nameless nurse or medical assistant of some form, are struggling to move forward. Harper is only making it through with the help of her best friend Emily (Giselle Muise), who pushes her to the best she can and tries to rid her of any distractions. Emily is temperamental and controlling, frequently snapping back at Harper’s mother’s attempts to get her to hang out with people at school and voicing her dislike for Sam (Cameron Kubly), a senior in Harper’s English class majoring in poetry who fancies Harper. But it soon becomes very clear that Emily is not real, at least not in the physical sense. She is the manifestation of Harper’s eating disorder.

Muise, whose vocal projection unfortunately doesn’t always match such an overwhelming force of a character (particularly next to and in duets with Berger, who is brassy and delightfully overpowering), plays Emily convincingly and, at times, terrifyingly. The character’s classic “I want” song at the end of act one, “All I Wanted,” is not of the Boogeyman, but of the abuser who tricks the abused into thinking they are really being protected. “All I ever wanted was to…” Help her, protect her, love her, despite destroying her. How powerful and truthful it is to not make her take the form of this scary, violent force. Instead, as Harper tells Emily later in act two, “I am angry at you for ever being so amazing.”

Teen angst, this show is not. It’s based off of Berger’s experiences and is clearly her own in all the best ways. The lyrics are simplistic and oftentimes saccharine, perfectly fine for a story that packs such a punch. Particularly in “Morning,” the show’s opener, where Emily makes sure Harper gets up and gets ready for school, Berger and Muise sing like they’re speaking, complete with breaks and sighs and stutters. It’s a victory for setting up this relationship and setting expectations that will very quickly be ripped apart.

Act one gets a bit muddled with both Harper's father and Emily looking over her. While Emily serves as her close companion and, at times, her mouthpiece (the Emily in Harper often comes out when she’s talking to her mother), Harper’s father either appears in flashbacks to Harper or Harper’s mother, or as omnipresence, usually with a song to sing. Full wraps up nicely in act two, but there’s a stretch where both the walking and talking angel/devil embodiments feel overloaded. In act two they are poles, her opposite driving forces— the angel on her left shoulder, the devil on her right. Where her father props Harper up and tells her she’ll get through this, Emily tells her, “Without me, you’re nothing.”

From Harper's mother and her father to Emily and Sam, the one thing they share is a promise to protect her in their own ways, as demonstrated in “I Will Always Take Care Of You.” This is Harper’s story, though. In “Black or White,” maybe the show’s best song, she comes to terms with her many multitudes and accepts that the world is allowed to be more than just black, white, and shades of gray.

Full holds nothing back. It’s an overwhelmingly honest portrayal of what living with and surviving an eating disorder looks like, of what dealing with grief and trauma looks like, and, thankfully, what overcoming those demons looks like. Berger's Full is full to the brim of hope and love, both for self and for self care—something so drastically missing from life sometimes.