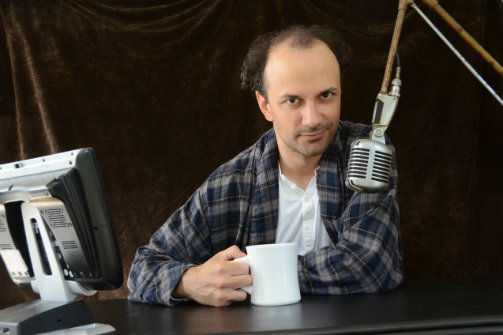 BOTTOM LINE: First Time, Long Time shows how a radio show can be much more than just a simple way to pass time on a car ride, and can indeed save a life...or seven apocalyptic puppets.

Lovers of eerie podcasts, unite! Jeremy Stuart’s self-written, self-directed play First Time, Long Time takes place in Harland West’s (Jeremy Stuart) modest radio studio, where he runs his self-titled talk show. Unlike what you’ll find while flipping through most stations, Harland’s talk show is far from normal. All of his callers—voiced by the immensely talented Malcolm Nicholas and Kathleen Fletcher—find themselves in near death, supernatural, or completely apocalyptic situations. One calls about being trapped between rocks 127 Hours-style while acquiring severe frostbite. Norman, another caller with a Kermit-like voice, finds himself face to face with a grizzly bear while blackberry picking. Sandra, sounding like a resident of Avenue Q, has just been electrocuted. Nicole, with her low, drawling voice, is stranded on her rooftop surrounded by quickly rising flood waters. Rick, with a Ray Romano quality to his voice, has just woken up on a desert island with a severe concussion. Jeffrey, with a young male’s whispering voice, has just witnessed a nuclear explosion from his bed. Lucille, perhaps the most elusive of them all, calls in and cuts out several times to tell Harland about the inviting hole in the wall and all of the wonders within. These calls are broken up by lighthearted advertisements for products like “Original Skin” body lotion.

What is most interesting about Stuart’s creation of “The Harland West Radio Show” is West’s calm demeanor. He wears a simple bathrobe with a shirt and pajama bottoms, and his desk is only occupied by his coffee cup, a clipboard of announcements, a hanging microphone, and caller board. Harland is incredibly well-read and seems to know how to handle just about every dilemma. He walks each caller through their next steps toward survival, almost like a grade school teacher helping a child with simple arithmetic. It is no surprise that all of these callers adore Harland West; his passion for his radio show and callers is charming. What is, however, surprising, occurs when I stop to think: all of these long-time listeners, first-time callers are in horrible situations, perhaps about to die, and somehow prioritize accessing their phones. Aside from just pure entertainment—which is certainly abundant—I have to think that First Time, Long Time is pushing toward something more thematic. Perhaps these callers have found themselves in limbo, and Harland is their voice of guidance, creating a parallel between technology's indisputable significance to our lives as being a new type of guardian angel. On the average day, technology tells us the weather, what route to take to work, and even displays the words of our closest friends so we don’t have to literally talk to them. Why, then, is it so impossible for a radio show to be some type of guardian angel hotline?

I close my eyes while Harland’s show plays on, and find that the play is still just as powerful when relying only on the ears. Jeremy Stuart’s quirky creation is a treat for anyone and everyone who enjoys a good radio show or could use a little help from a modern-age guardian angel like Harland West. In a world where theatre is dominated by large ensembles and massive budgets, First Time, Long Time serves as a reminder that one man onstage, committed to his humble job, is more than enough to qualify as a fantastic evening of theatre and storytelling.

The cast is Jeremy Stuart, Kathleen Fletcher, and Malcolm Nicholas.