Everything Is Fine Until It's Not 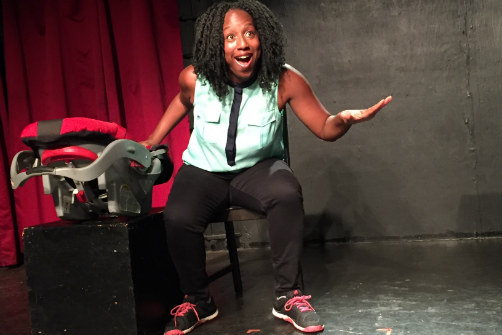 Doreen Oliver in Everything is Fine Until It's Not. Photo by Kali Fields WIlliam.

BOTTOM LINE: A touching, and sometimes humorous, show focusing on Doreen Oliver's experiences as a mother trying to care for her autistic son and find a balance in her life.

With more and more children being diagnosed as autistic, it seems strange that the voices of the parents who struggle with children affected by this disorder are so rarely heard. Doreen Oliver’s one-woman show Everything is Fine Until It’s Not explores this terrain as she shares her struggle to care for her autistic son, Xavier. While Xavier initially seems like a sweet, normal infant, his failure to speak as a toddler raises red flags, so Oliver seeks out help from the city. After being given access to psychologists, speech therapists, and experts, Oliver tries to find the right path to aid her son. In one touching scene Oliver successfully provokes Xavier to speak by singing a song over and over, waiting for him to fill in the missing word. The final phrase of the song is completed by a recording of her actual son, making the moment more real, and more touching. While Oliver struggles to balance work, marriage, and motherhood, she is given humorous advice from her own mother and a bevy of aunts. As an independent spirited workaholic, the demands of having a child with special needs takes its toll on Oliver as she makes sacrifices but still manages to create a life of her own. Oliver imbues the day to day experiences of motherhood with enough emotion and storytelling to make them riveting, such as trips to the playground where Xavier struggles to play like the other children.

Oliver is an energetic and captivating performer who truly puts her heart into her performance, showing skill in both her movement and her delivery. Her vivaciousness is contagious, and one cannot help but root for her and her story of determination. Her touching experience shows how a mother’s love and perseverance can defy the odds and overcome problems. The personal flourishes given to this show, including photos of Xavier as a baby and child, and a touching video of him playing and singing “Let It Be,” all give a strong sense of the emotions and experiences Oliver connects to her son. The fact that Everything is Fine is also peppered with sound effects of Oliver laughing, singing, and talking makes him feel very present throughout the work. While one might expect a story about motherhood and the challenges of autism to be overly sentimental and preachy, this production is rather an honest, heartfelt tale about family, love, and motherhood that anyone might relate to.

Everything Is Fine Until It's Not is written and performed by Doreen Oliver. Directed by Janeece Freeman Clark. Production Assistant is Anderson Heinz.