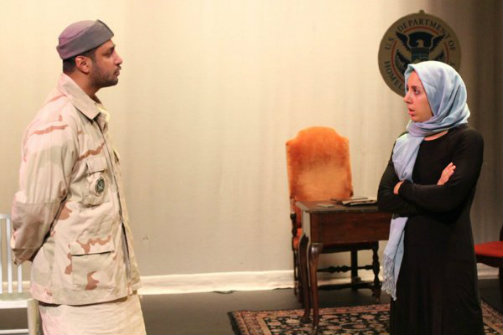 BOTTOM LINE: Debriefing imagines an American activist-turned-spy and her Homeland Security trainer as they navigate between serving their country, their own values, and the individual value of human life.

Maximillian Singh Gill’s new play Debriefing drops us in the middle of an interview between Homeland Security agent Reed (Andrew Rothkin) and a young woman named Aliya (Nazli Sarpkaya). It quickly becomes clear that Aliya witnessed an American drone strike during a trip to Pakistan and that Homeland Security wonders both about what exactly she saw and the impact of the experience on her politics.

Aliya is politically active against both the war effort in general and the use of drones in particular—she's a frequent participant in both live rallies and on-line activism. This makes Reed wonder aloud if she might either be vulnerable to radicalization by a terrorist group or, perhaps, the perfect person to spy for the United States because others would believe she could become radicalized.

The core idea is exciting—that the government sees in this otherwise untrained young woman a chance to infiltrate a terrorist network because the terrorists themselves might look at her as one of the rare American citizens open to their cause. Eventually Aliya agrees to the mission. Reed trains her to join the IC (Gill's way of referring to what is elsewhere variously known as ISIS, the Islamic State, or ISIL) and she is sent undercover to enter Syria and volunteer as a nurse in an IC battlefield hospital.

Gill writes in a mostly taut style that results in clipped, spare back-and-forth while sometimes launching into more poetic expansiveness. For example, in one scene a pair of bureaucrats banter and then suddenly one responds with a florid metaphor. It is a challenging tone shift in the text. Rather than embracing this reality, however, the playing Debriefing glides over these switches to smooth them out. The casually realistic style of performance and direction makes the more florid passages feel discordant and writer-ly.

Occasionally the generally leaner use of language, coupled with strong emotional responses, also results in confusing moments where the reason for a strong response is unclear or seems out-sized in relation to the event. Make no mistake, the stakes are high in the lives of these people, but too often, small events are played with as much significance as enormous ones. The result is that the truly important moments lose their heft for lack of contrast.

I'll avoid giving away what specifically happens after Aliya’s departure for Syria, except to say that the last third of the play leaps back and forth between those events and a debriefing room some time later. Some of the best scenes occur in those flashbacks to Syria, scenes between Aliya and fellow informant Waleed (played with excellent restraint and specificity by Adeel Ahmed). The urgency of their conversations, the risk of being caught, and the need to appear disinterested tamp down some of the broader performance impulses and result in simple and clear needs with high stakes.

Perhaps most admirable about Debriefing is that the play does something unfortunately rare in our conversations about those involved in war. It acknowledges that on both sides the front lines are filled with young men who, regardless of their convictions, are full of fear and need in moments of pain or horror. Late in the play Aliya tells the story of one young IC member who cries for his mother’s forgiveness over a minor event as he lays dying. In that moment the complex humanity of a single person, regardless of their ideology, is the focus. It is a compelling idea and one not easy to fit into a five-minute news report or political speech. It needs the messy in-person humanity of the theatre.

Debriefing is by Maximillian Singh Gill. Directed by Joan Kane. Set Design is by Lytza Colon. Lighting Design is by Bruce A! Kraemer. Sound Design is by Jacob Subotnick. Costume Design is by Cat Fisher. Stage Manager is Janelle Zapata.