Off Off Broadway, Solo Show
Runs through 8.27.16
VENUE #4: Abrazo Interno at the Clemente, 107 Suffolk Street 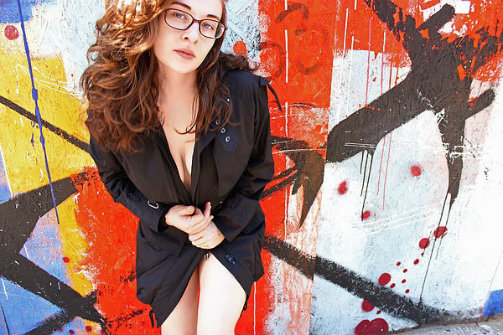 BOTTOM LINE: The autobiographical Cuntagious is a reminder for men and women alike that stigmas against screwing are screwing women over, and—no—it does not make us c-words for thinking that.

“Defining a woman by her worst sexual choices is like defining your health by the worst meal you’ve ever eaten.” Standup comedian Kaytlin Bailey kicks down sexist notions against women in her autobiographical one woman show, Cuntagious. She ventures into her life story before the audience with an unparalleled air of brassiness, explaining her lust for sex work as a teenager. As an ass-kicking feminist since toddlerhood, Kaytlin does not seem like the kind of modern woman who would make an intentional pursuit of escorting and prostitution. However, this self-proclaimed c-word is here to challenge the hate against the women in this line of business. She had a wholesome upbringing, as American as it gets, really. Her father is a Green Beret and is nurturing toward his daughter. Her mother is a marching feminist who has always preached love and a great outfit. Kaytlin Bailey knows how to give her North Carolina town hell and stand up for her rights to free speech, free love, and her body.

Bailey reflects on her past sexual encounters—both personal and for business—and notices that she was always protected and in charge with the clients. With her personal hookups, on the other hand, she has had to beg men to use a condom, and in some situations doesn’t even know what they do for a living. She is, indeed, an entrepreneur, raking in enough money to treat an entire bar to oysters, acing all of her high school courses, and holding on to a close relationship with both of her parents. Although she leaves sex work by the time she starts college, she can still say that yes, she came out pretty good. It seems that the only sexually scarring events in her life were a result of her personal relationships, never her clients.

Although Cuntagious is a one-woman show, it would be wrong to say that this hour of fantastic storytelling is solely about Kaytlin. This show casts light on the long-standing history between damaged men and the women they pay to sleep with them. What are these men bringing to bed with them? Many of Kaytlin’s clients cry, or schedule appointments just to chat. In these sobering moments, she acknowledges that sometimes it becomes too much to try to hold on to a person when there are fifteen or twenty years of anger between the two. “There have always been whores,” she says, “some of us victims, some of us free. You could also say the same thing about housewives.” Women are, and always have been, getting screwed and screwed over by sexism. We may as well fight back as women and embrace being the ones who do the screwing.