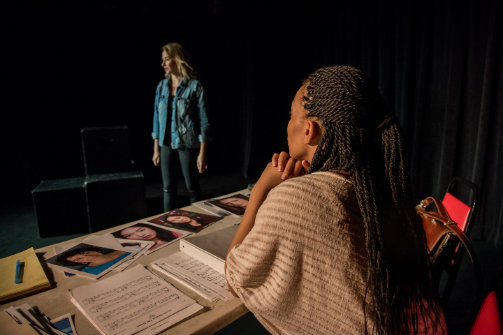 BOTTOM LINE: A timely exploration of how in 2016, a white actor can get cast in a role for a minority.

At Porchlight Music Theatre in Chicago last month, a white actor was cast as Usnavi in In The Heights. Earlier this summer, the Bay Street Theater canceled a reading of Prince of Egypt after controversy over the white cast. And last year at Kent State University, a white actor was cast as Martin Luther King Jr. in The Mountaintop. That last one in particular seems to be the inspiration for the timely Colorblind'd, as some of the details are similar.

What was surprising about that real-life incident at Kent State was that it was an African-American director who hired the white actor. In Colorblind'd, which takes place at Dixie College in Alabama, it's also an African-American director, Eden (Malikha Mallette), who insists on casting a white actor as Rosa Parks. Her argument is that Lucy (Jenna Sander) gave the best audition, and the only black girl in the department, Dorien (Yanece Cotto), is a terrible actress. David (James Kloiber), the white department chair, tries to talk her out of it, but mostly because he's worried for his job, not out of a sense of moral obligation.

Unfortunately, we never get to see Lucy as Rosa Parks, or—other than a few brief lines—much of the play itself, which Eden thinks is such a masterpiece. Playwright Kirk White tackles a lot of issues (there's an unnecessary affair between two of the characters), and because of this, the characters aren't always fully drawn. It is worth noting that White and director Keith Winsted are both white men; while they have every right to tackle these issues, it is hard not to wonder if this is why Colorblind'd stays mostly at the academic level, as opposed to showing how the casting process that it depicts directly affects people's lives. The exception is with the character of Dorien: Cotto brings an emotional weight to what would otherwise be an ideas play. She has an exchange with Eden about how she is paying good money to learn to act, not to learn real-world lessons, that is the highlight of the play, and the most well-written.

Colorblind'd is by Kirk White. Directed by Keith Winsted. Lighting Design is by Steven Zhang. Sound Design is by Jeremy Pagirsky. Costume Design is by Quameisha Moreno. Stage Manager is Emma Ruopp.