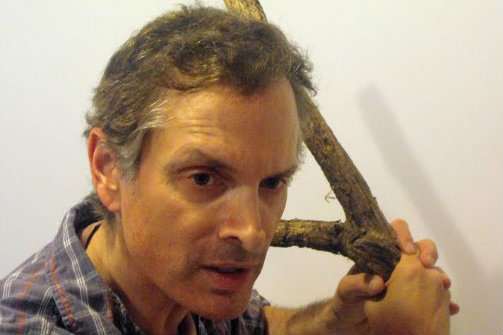 BOTTOM LINE: Canada Geese paints a portrait of one man’s journey through life that will leave you meditating on your own path through the world.

Canada Geese, a meditation on the meaning of life in a changing world, evokes the idiom “Freedom is not free” or, in the language of the show’s tagline, “Freedom is a bitch.” This solo show, written by George Klas and directed and performed by Scott Klavan, frames an exploration of what freedom actually looks like through the experience of a very specific member of the American social fabric: a Kerouac-toting, post-war white male. Through a nonlinear narrative, Canada Geese shows a man struggling to reconcile his expectations about life, success, and happiness with his reality. We understand quickly—it takes him more time—that the promises made to him about how to lead a fulfilling life have crumbled. In his impotence and confusion, he struggles to find a place to call home.

Expressed from the man’s perspective, scenes jump between the past and the present. We see him as a lauded ad executive accepting an award for his “creative” work; at his Hare Krishna wedding running blissfully into the sea with his beloved; as an older man, now homeless, selling fictionalized homemade celebrity gossip magazines on the subway. Throughout all of these iterations of self, he maintains a pursuit of liberation, and is sustained by his rakish sense of humor and desperate attempts at connection. Klavan has some beautiful moments, including a particularly tender one in a neonatal ICU after the premature birth of his son Jaime. He sings sweetly to the little one, so delicately straddling life and death, inviting him to come join them in the world. It is a poignant gesture because we understand his personal struggles with feeling engaged in the world. This scene morphs beautifully into a playground; Jaime, now a little boy, is swinging. Klavan creates the moment skillfully, pushing his son with convincing realism and shouting “You’re flying!” This gestural push bookends the show and acts as a reminder that the man, too, wishes he could fly.

It is particularly cruel then, that his ultimate moment of humility comes at the hands (or, wings, I suppose) of geese, where the play gets its name. Without giving too much away, the man has lost everything, and is forced to truly degrade himself. Canada Geese asks whether this is the moment of freedom, and further, whether freedom is even possible. The theme of freedom (freedom from and freedom to) is underscored by the recurring references to Kerouac and Ginsburg. The man carries On the Road in his pocket, referring to it as his bible and offering it, in a final moment, as his only real possession. The show does not attempt to explicitly answer any questions about the cost of freedom and happiness, rather leaving space for reflection and asking, “What’s more important, figuring out the questions or the answers?”

Sound designer Pornchanok Kanchanabanca should be applauded for her tremendous work, which does most of the heavy lifting to set scenic shifts. Kanchanabanca’s soundscapes are crisp and nuanced, suggesting the shift of time and capitalizing on specificity to truly create the environment. Canada Geese is performed with nearly no set save for one small, pink seat and a few metal folding chairs, cast in a cold, blue light by Anthony Tornambene. In terms of costumes, Scott Klavan looks more or less like he walked in off the street, and so works to create physical clues about the character’s age and location.

The character is referred to in the program only as MAN, suggesting the universal themes about life and survival. However, Canada Geese actually explores a very particular frame of reference. The man’s expectations about success and his disillusionment with corporate life speak to a uniquely post-WWII American masculine narrative, identifying with both the Beat poets and American exceptionalism on a personal level. His inherent privilege, both to be able to make the choices he makes and to wander, reflects a specific experience of the world that could not and should not be understood as universal. It would be reductive to assume that the Man represents everyone—and though Canada Geese does not make this claim outright, it occasionally seems like it would be fine with that conclusion.

There is nothing limiting about a show that tells the story of one very specific struggle through life. Canada Geese shines best in its details and commitment. It also asks important questions; in our contemporary moment of political turmoil and social upheaval, the question of what freedom actually looks like is a valuable inquiry. However, the play's most transcendent moments—the ones that truly speak to humanity’s shared existence—are when it touches upon the true weight we carry—love.

Canada Geese is by George Klas. Performed and Directed by Scott Klavan. Sound Design is by Pornchanok Kanchanabanca. Lighting is by Anthony Tornambene. Stage Manager/Assistant Director is Traci Bargen.