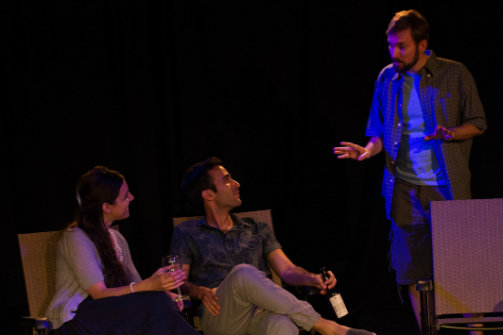 BOTTOM LINE: A new take on an old legend, Bodies of Water engages thoughtfully with the idea of bravery.

Three old friends gather at a family beach home where they've been meeting each summer since childhood, and which is about to be sold. The friends—struggling actor Margot (Elizabeth M. Kelly), playwright Jason (Jordan Douglas Smith), and TV star Benny (Eric Cotti) meet for what is probably the last time, joined by Benny's sweet but unwelcome girlfriend Claire (Jenna Kraskowski). The end of their world together and the end of the world in general mix nicely in the magical realism, and everyone's heart gets a little bit broken.

As a good prologue should, Margot’s opening speech in Bodies of Water works to set the tone for the production: “People look at me all the time, but I really, really, like to be seen.” It’s true that Kelly stands out in a refreshingly complex representation of what it really means to live the life of a beautiful woman. The rest of the characters’ subtleties are lost to a single poor directing choice: perhaps 30% of the other actors’ dialogue doesn’t reach the back of the theatre.

WOW Café is a difficult summer festival venue: with open windows letting in natural light, blackout curtains must be hung, blocking airflow and requiring large box fans to keep the audience bearably cool. So in Bodies of Water, the last three rows of the small ten (or so) row house, including this reviewer’s seat, lose a great deal of dialogue between the fans and the loud wave noise blasting from back-of-house speakers. Perhaps Randall Benichak didn’t design the soundscape with full knowledge of performance conditions, an understandable pitfall for a Fringe show’s accelerated staging process. Fringe conditions may also explain why a pivotal scene takes place on the floor downstage center, where an even smaller fraction of the audience can see and hear two characters’ low, intimate conversation.

Apart from this unfortunate issue with sound and sight lines, Bodies of Water is a fresh exploration of what it means to be our best selves, when the people close to us have so much sway over where—and who—we want to be. A movement segment, sadly too short, is gorgeous (Laurel Snyder is to be congratulated) as the show wades into magical realism in its final thirty minutes. With tighter time constraints, the burden might have been placed more heavily on movement segments like these, not to mention the capable cast’s ability to carry their characters, rather than relying on long expository conversations that explain the characters’ relationships (a literal onstage game of “Truth or Truth” might have been unnecessary).

Bodies of Water is clearly channeling Lanford Wilson more than Hans Christian Andersen, and that ambition cradles Margot’s compelling story. What I could hear of the other characters was also compelling, and would seem to provoke our investment in their well-being. A tighter hand on the reins, and a different venue, will perhaps help Bodies of Water fulfill its great potential.