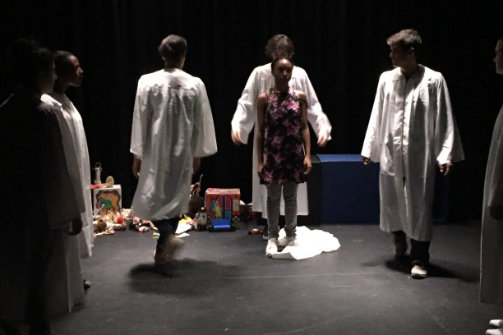 The Chorus of #Blessed with Victoria Villier. Photo by Zoe Kamil.

BOTTOM LINE: #Blessed brings to light what it truly means to be a good person in today’s ambiguous world, where everyone possesses a balance of good along with a taste for a bit of bad.

The creative team behind #Blessed refers to the play as a modern interpretation of the Book of Revelation —the prophecy depicting the second coming of Christ and the ultimate end of humanity. Clearly, this is not quite what happens in the two hours of #Blessed, but the metaphor behind the story stands true with a society brimming with so much bad intermingled with the good, and where a savior is needed to bring the truth to light.

At the beginning of Zoe Kamil’s #Blessed, Liana Goodwin (Anna Dale Robinson) and best friend Katie Volchik (Rebecca Lampiasi) take the stage as pious high school Christians staying true to their faith amidst the current risqué times for millennials. The two are planning a “Jesus and Jelly-Filled” bible study when Liana gushes about a cute boy in her class, Michael Silverton (Thaddeus Kolwicz). Despite Liana’s sweet innocence, Katie claims that Michael is capable of ruining the most devout young woman, and in no time Liana would be completely turned from Jesus, wearing crop tops and spreading her legs for every boy in school. However, Liana soon meets Leticia (Natasha Krause, a definite standout) and Todd (Marcus Shacknow)— Michael’s party-loving but genuinely sweet friends—who help her realize that wanting to date someone doesn’t make you a bad Christian. Liana starts seeing Michael, and as their relationship escalates, she and Katie’s once sisterly bond crumbles. Interestingly enough, Katie’s distrust in Michael is not simply faith-based—Katie secretly dated Michael, lost her virginity, and had to get an abortion months before Liana met him.

As friendships and faith continue to be tested throughout this coming-of-age play, one question in particular continues to rise—what does it mean to be “weird”? Many students in the school view Liana and Katie as weird because of their faith, but other students view Michael’s clique as weird for freely drinking, smoking, and having sex. But the exploration of “weird” goes far deeper than this in #Blessed. Each character represents a specific hybrid of both stereotypically good and bad characteristics. We see a pot-dealing rabbi’s son, a date-raping all American white athlete, Christian girls who want to explore intimacy, and an androgynous, purely fabulous Jesus Christ (Ian Fields Stewart, a truly sharp and contagious actor). #Blessed blends the unexpected with the traditional, and proves that what is easy to perceive as strange or imperfect is truly what makes these characters perfect.

Audience members of any faith or lack thereof will find it easy to climb onboard #Blessed with its lovable characters, haunting biblical interludes, catchy music, and 1980s-Molly-Ringwald-film vibe.