Ariadne on the Island 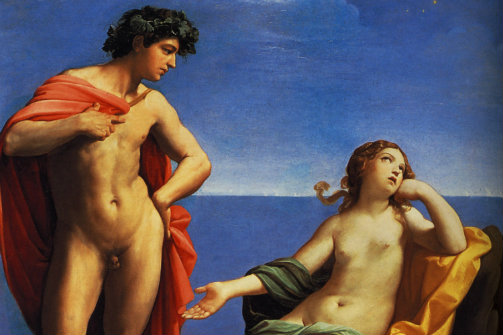 BOTTOM LINE: Ariadne on the Island stages classical Greek mythology with a bigger bark than bite.

Ariadne (Sarah Quigley) has been abandoned by her ex-lover Theseus (Russell West.) Naked and afraid, she meets Dionysus (Jimmy Sawyer) of wine and ecstasy fame. He’s notoriously depicted as a fat baby or a very old man, holding a double-edged place as the man-child of Greek gods. As such he has an inappropriately strong and one-sided love affair with Ariadne immediately upon meeting her. When the story is momentarily not about him, he sulks in the corner or calls for an intermission. For example, because Phaedra (Samantha Irene) is not part of the Dionysus story, he’s naturally bored when she is seduced by Theseus, who happens to be her stepfather. The link here is Pasiphae (Erin Hildy), who is both Ariadne and Phaedra’s mother and a victim of rape by a bull, here depicted with surprisingly balletic grace.

The production is told with nods toward a Greek chorus through the knowledgeable crabs (Steven Bono Jr. and Rebecca Sands). It’s staged simply, with the actors remaining onstage throughout, seated backwards on overturned, painted buckets designed by Thea Wigglesworth. Isaac Allen Miller's writing is honest, though it occasionally overuses "fuck" instead of going after some more meaningful dialogue.

The mission of The Cutout Theatre is to cut out the bullshit of theater-making and get to the core of the storytelling. It’s an admirable mission that I don’t see fully executed with Ariadne on the Island. Avery Wigglesworth’s direction is surprisingly conventional and can move slowly, with lengthy blackouts between scenes that don’t seem to be covering anything. Evan Lutvak’s sound design is appropriately loud and decidedly Top 40 to increase our sense that this is some kind of party. I just question whether or not that’s the right move to help us get to the heart of this rather traumatic story.

Ariadne on the Island wants to be dirtier than it is, or dirtier than what the limitations of the Fringe allow it to be. The advertisements boast claims of nudity and explicit language and staging. Some of that is here, but the production largely keeps a lid on it. Especially in New York, if there is a warning, I expect quite the punch. Ariadne’s grit feels like a marketing trick. Dionysus, the man-child, is a lot more of a child than he might otherwise be; his sinister power is not a threat. And the incestuous love affair of Theseus and Phaedra could use some harder edges. Quigley makes an exposed entrance, nude, and as shit hits the fan further along she’s given a romantic bra and panties by designer Rachel White in which to carry the show. Occasionally Quigley is given water to dunk her head in and sand to play with, though she’s never allowed to fully explore the depths of despair that these Greek epics require. We spend a lot of time making light of these stories rather than understanding the fear.

I do dig what The Cutout Theatre is trying to do. Their truthful, no bullshit mission is spot-on to unlock some quality storytelling. I’m curious to see what that means outside the confines of Fringe. Keep them on your list.