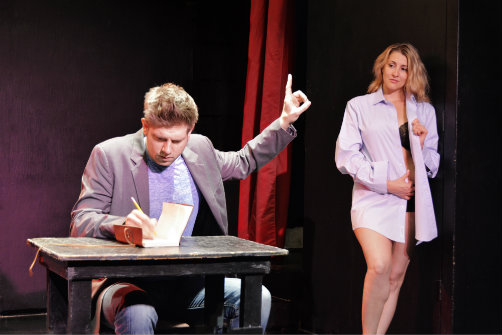 BOTTOM LINE: A perplexing tale of a struggling playwright riding the subway while trying to make sense of his life and relationship with his ex-girlfriend.

Anonymous Anonymous is a puzzle of a play. As Dan/Steve (Dustin Charles) takes a ride on the F train, he’s working something out. A play perhaps, a dream he had, or is he reliving memories of his life and the former romance he had with his leading lady Natalie/Cassie (Kristin Wetherington)? Whatever it is, it has had a profound effect on him.

Sofge’s play has an autobiographic feel to it. There are some moments that are loopy and amusing. Others are somber and almost brought me to tears. Sofge’s work has terrific ideas, but they are confusing and muddled. Sofge co-directs with Michael Melkovic, and they poke fun at many commonplace theatrical ideas: characters taking over a play, using flashlights (Miner headlights?”) instead of conventional lighting, swashbuckling medieval quests, and breaking the fourth wall. It is all kind of meta.

Throughout the play, we continually see Dan/Steve’s breakup with Natalie/Cassie, and even though the dialogue remains the same, we see subtle shifts in how Dan/Steve experiences the moment—it’s remarkable acting by Charles and Wetherington. Sofge and Melkovic direct these scenes beautifully.

Which isn’t to to say that there aren’t also funny moments: Tony Del Bono, Dereks Thomas and Nick Westemyer play an assorted group of characters: bumbling villains, subway dancers, comically panicked people at some unspecified support group, just to name a few. It is clear that all three actors have a great time romping from role to role.

Throughout all of the commotion, Dan/Steve carries his “magical” notebook where what he writes somehow becomes real. At least to him. Tucked away in a pocket, or sitting in his lap, he writes—and then keeps rewriting—his past into a play, into something he can come to peace with.

At times I wondered if Anonymous, Anonymous is a play within a play…within another play? It’s hard to tell; while initially intriguing, it's easy to get lost while trying to follow, or even construct, the timeline, and to figure out where, and when, Dan/Steve is at various points. Is this all his wishful thinking? Which memories are his true ones? Which came first, his meeting with Natalie/Cassie, or his play? Now, on a New York City subway, he’s still seeking to find an ending to the play he’s been trying to write for years. It is mysterious, sweet, and poignant: “what’s done is done,” in more ways than one. And while there seem to be multiple endings, perhaps this is the point: life does not tie up as neatly as a fictional play.