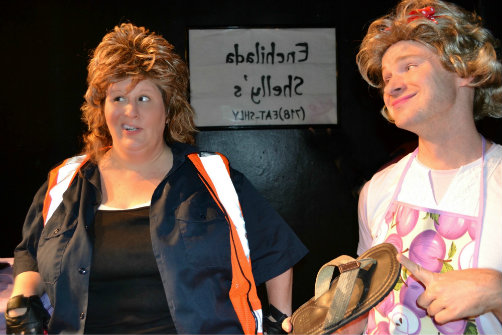 BOTTOM LINE: Digestive tracts aren’t the only things in for a wild ride in A Microwaved Burrito Filled with E. coli, a show that challenges gender norms and what it really means to be a woman.

At Enchilada Shelly’s, the grimiest Mexican restaurant in all of New York City, Molly “Equality” Dykeman (Andrea Alton) and Angie Louise Angelone (Allen Warnock) face problems much larger than post-burrito heartburn. Molly, a butch lesbian high on a cocktail of prescription pills, finds herself in the back room of the restaurant when she and her girlfriend, Giselle, get in a fight. Bubbly waitress Angie, clad in a blonde wig and cute pink number, takes Molly’s order. Although Molly is anticipating a burrito “filled with anxiety," Angie is seeking a friendship. Angie's just moved to the city from Kentucky, and her naiveté is shining through. Molly is beyond reluctant—it’s obvious from her fingerless leather gloves and mullet that she’s not one to seek friends for an afternoon shopping spree. However, when one of Angie’s glittery flip-flops gets stolen by a wedding guest, Molly springs into action, beating up every guest in sight until she can wrangle a new one for Angie. It’s clear from this point forward that this friendship is meant to be.

Despite the heaping portions of lesbian jokes and drag ferocity, A Microwaved Burrito does cross into deeper territory. Midway through this hour of kick-ass comedy I asked myself, “what does it mean to be a woman?”. Delightfully, although both characters identify as women, neither plays the all-too-common submissive and smiling straight-white-cisgender ingenue. But if neither fits the old-fashioned theatrical female mold, both have many reasons to be smiling women just the same. Perhaps another reason these two characters make such an appealing pair is because they share a common love for women. Molly cannot speak enough about girls in every borough lusting after her, and Angie tears up venting about how she’ll do anything in her power to save up money so she can finally get gender reassignment surgery. One loves women and the other can’t wait to be one more fully, and this is the core of their bond.

As a writing/acting comedy duo, Alton and Warnock are polished and ready to crack you up, and potentially inspire you as well. In the words of Molly: “God maketh you the way he fuckin’ maketh you,” so prepare for a heaping serving of love and female empowerment along with your microwaved burrito.