A Brandy Before Dying 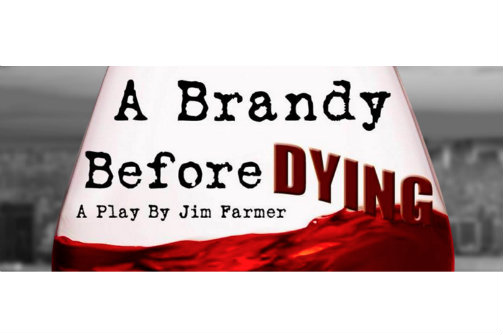 BOTTOM LINE: True to its title, A Brandy Before Dying mixes the nonsense of upper-class propriety with some fairly dark and twisted hijinks.

Patsy and Penny Lawncock have a disastrously unhappy marriage. Perhaps this has something to do with Penny’s former marriage to Patsy’s devilish twin brother Roger. Either way, Patsy’s taken to hiring an escort, Jenine, to stave off his loneliness. With all that in place (as well as a particularly well-timed murder) A Brandy Before Dying speeds off into its ludicrous, unrelenting action.

Jim Farmer’s language hits you like a hammer and his play pulls no punches in its bawdiness and irreverence. His show lets us in on a larger-than-life world that is able, nonetheless, to satirize our own (cue rock crashing through the window with a Chinese menu attached—“These immigrants are getting bolder and bolder!”). Farmer’s quickness and imagination never cease to impress as the story pushes forward. Yes, there’s much fun to be had while watching the hijinks of these upper-class, foul-mouthed, and ultimately very childish Brits moving from one disastrous undertaking to the next: escaping the police, ramming other cars off the road, and threatening each other at gunpoint every chance they get (for a start).

Doug Rossi and Sean Gavigan deliver a consistently tickling dynamic as the rival twins who look nothing alike. Penny Balfour plays well off of everyone as the wildcard vixen conflicted between the needs of her heart and her depleting net worth. Brandi Nicole Wilson rounds out the cast superbly as the nurse Gwen Fra’Diavolo, perhaps the story’s most insidious mover and shaker. The extensive sound design by Hamilton E.S. Smith is a victory, especially in a festival setting, aiding with ambience and even replacing various bit roles with pre-recorded voiceover.

Brandy’s overarching narrative, though singular in its tone and sheer insanity, leaves something to be desired. Despite its lightning-quick language and action, the play can’t help but lose steam as it progresses. The characters, despite being performed by a uniformly talented cast, are hard to track from one scene to the next. One gets the sense that these aren’t people with whom we’re really supposed to empathize; even so, the ambiguous rules of the world make it unclear as to what will actually affect any of them, let alone the audience by association. The plot doesn’t exactly help alleviate this as its many twists and turns become more like cumbersome facts than elucidating action. This isn’t to say that A Brandy Before Dying ceases to be entertaining or fun, but by the end it edges on representing more of an amalgam of naughty behavior rather than a cleanly executed narrative.

With some tightening and finessing, A Brandy Before Dying could become an absolute powerhouse of a show delivering thrills amidst non-stop laughter. The individual elements being so strong, one simply requires a more unifying aesthetic to push the show to its next logical stage in development. Be on the lookout for this one as it progresses.

A Brandy Before Dying is written and directed by Jim Farmer. Light and Sound Design is by Hamilton E.S. Smith. Stage Manager is Margo Bea Murphy-Gross.