Off Off Broadway, Musical
Runs through 8.29.15
VENUE: FREE FringeAL FRESCO—6 & B Community Garden at the corner of 6th Street & Avenue B 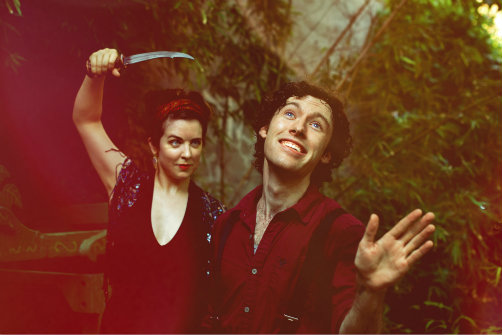 Corley Pillsbury and Kyle Acheson in What's Your Wish? Photo by Ellen Bryan.

BOTTOM LINE: Children of all ages will love this contemporary musical fairytale.

With 200 shows in this year’s New York International Fringe Festival, it can be difficult to decide which one(s) to attend. Do you want something dramatic? Funny? A solo show? A play with music? A fantastical whiz-bang alien invasion drag show with puppets?

Nicholas (Kyle Acheson) is turning 16. He has waited for this day to come, as he expects to get something he’s coveted for some time: a new car. He is surrounded by friends and family eager to celebrate his birthday and shower him with presents: his mother Diana (Corley Pillsbury), his potential stepfather Donald (Joshua Stenseth), his best friend Brian (Sam De Roest), and his little sister McKenzie (Lindsay Zaroogian).  When the time comes for everyone to give his or her respective gift, however, Nicholas is left speechless; instead of a car, he receives a watch, a tiny Swiss Army Knife, a non-specific IOU, and…a cursed book that the goth McKenzie claims will steal his soul. Fun!

Devastated by his unexpected lack of available horsepower, Nicholas retreats up to the attic with Brian, where Nicholas intends to begin his chore of tidying things up. As they arrive upstairs, they realize that McKenzie’s creepy book has mysteriously followed them. Against Nicholas’ wishes, Brian decides to tempt fate and open the book, which promises to grant wishes. Before they know it, the boys are whisked away to the magical world inside the tome, where they find themselves on the outskirts of “Death Forest.” They soon discover that, in order to return to their normal lives, they need to find the enchantress who lives at the top of the ominously named “Mount Sacrificé” (pronounced sa-cri-FEE-chay). Will they survive? Will they remain friends? Will Brian consummate his budding relationship with the beautiful enslaved fairy sent by the enchantress to kill the two boys and harvest their virgin blood? These questions and more are answered over the course of the boys’ harrowing and heartwarming journey towards discovering their adolescent identities.

On the website of Thicket and Thistle, the New York-based troupe behind What’s Your Wish?, the company perfectly self-identifies as “musical theatre for adult children.” Indeed, both my inner child and outer adult were delighted by the catchy melodies and intricate harmonies in this whimsical piece of original theatre.  The ensemble is tremendously talented, demonstrating marvelous comedic timing while playing everything from flute to accordion. Aided by Jonathan Foster’s snappy direction and a remarkably cohesive score, the actors move things along smoothly, stopping only to deliver a one-liner or emphasize a particularly clever lyric. By the end, I felt I had gone on a journey worthy of Disney or Pixar. And at a breezy 90 minutes, you can be out in time for brunch or dinner at any number of nearby East Village hotspots. Oh, and did I mention that it’s free?  Yup, free. It’s like Shakespeare in the Park, but funnier (and without all the Bank of America ads).

So you’re looking for a smart, entertaining, imaginative musical that you can take the kids to? Wish granted.