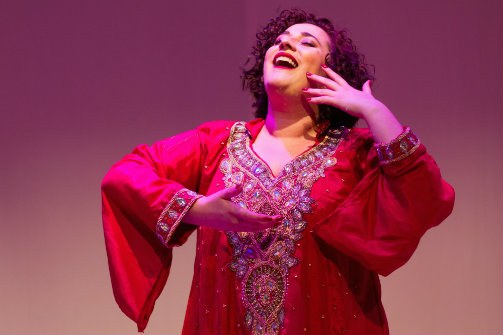 Misha Bouvion in Venus and Adonis. Photo by Jody Christopherson.

BOTTOM LINE: The goddess of love hunts a hunky hunter, with words provided by the Bard himself.

William Shakespeare wrote a lot of plays on a wide range of topics: Roman history, British monarchy, myths, and legends. However, he also wrote poems—not only his famous sonnets, but also narrative romances. Amazingly, Will seemed to think his 1593 work Venus and Adonis was much more significant than those silly shows he put on. But alas, not many of his contemporaries agreed.

However, actress Misha Bouvion has brought Venus and Adonis to the stage, adapting and performing it as a monologue, with the assistance of director Daniella Caggiano. Bouvion plays the goddess of love herself, but her portrayal eschews the other-worldliness and grandeur you might expect of an immortal; instead, her Venus is a brassy broad in a sparkly caftan, leaving dignity far behind in her quest to seduce the young, sporty Adonis. It seems that the hardheaded fellow, for all his sex appeal, is cool as a cucumber, completely focused on perfecting his hunting skills and essentially immune to the goddess’ attractions. Bouvion’s Venus tries every tactic to arouse the youth’s passions—charm, titillation, pleading, threatening—but the most she can force out of him is a reluctant kiss that leaves her gasping and him unmoved.

Bouvion’s approach is broadly comedic for the first two-thirds of the performance, then takes a turn for the dramatic when poor Adonis embarks on the boar hunt from which he will never return. Her command of Shakespeare’s language is flawless, though her choice to play against the text by portraying Venus as a frustrated sexpot rather than a celestial being makes its tragic conclusion somewhat less effective. However, it’s always a treat to hear Shakespeare’s words on stage, even those he never intended to be heard there.