The Universe Of Matt Jennings 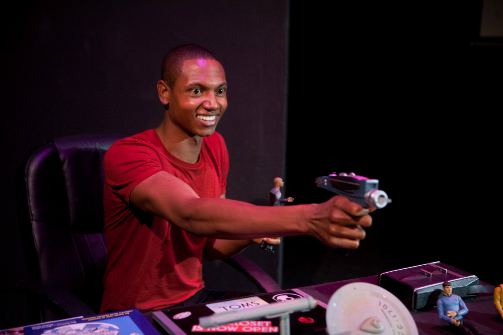 BOTTOM LINE: A cross between slam poetry, stand-up comedy, and impersonation; a very truthful look at an identity crisis.

Matt Jennings has one hour to prove his worth as an individual to avoid execution at the hands of Star Trek’s “Q” (impersonated by Matt). From here, he begins with his childhood and journeys chronologically through all of his idols, be they family members or movie stars, detailing their influence on his development.

Jennings does this mainly through impersonation, immersing himself into each impression with vocal acrobatics and complete physical transformation. His impression of his grandfather—complete with drastically shifted walk, posture, and mannerisms—particularly stands out. He impersonates everyone from Captain Kirk to his own mother, allowing the audience to share fully in his childhood experience.

The show focuses on “coming out," at first with Jennings "coming out" to the audience, comically, as a Trekkie. Later, as he begins to discuss his adolescence and coming to terms with his sexuality, the show takes a dramatic turn. By using Star Trek as a comic vehicle, his statements regarding the journey of identity and importance of ignoring social molds become even more relatable and meaningful.

The piece, though loosely tied together through chronology and recurring characters is a bit hard to follow. Many devices are put in place to create sense of plot: the reappearance of “Q”, Star Trek impressions and references, certain repeated phrases. However these devices are not used frequently enough to resonate completely. The repetition distracts from the plot rather than enhances. Additionally, the transitions between impersonations can get a bit long, taking the audience out of the pressured, fast paced action “Q” creates.

Everyone, at some point deals with identity issues, but few discuss it—these thoughts and questions of self remain hidden behind acceptably strong social images. Jennings has an incredibly passionate vulnerability throughout his performance, allowing him to share and bring to life this very relatable yet taboo experience. Jennings' performance is courageous.