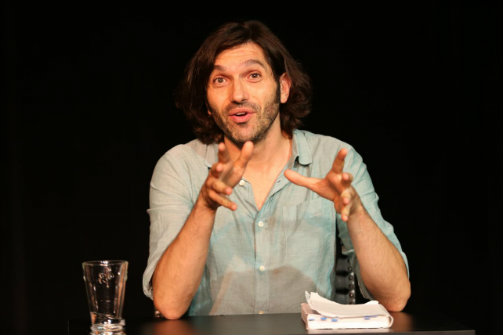 Adam Strauss in The Uncertainty Principle. Photo by Dixie Sheridan.

BOTTOM LINE: A rambling monologue packed with a series of hilarious observations worth coming to laugh at.

Adam Strauss enters an empty black box stage and hastily begins to speak. Moments into his first few barrage of statements and questions, the lights settle behind his pace; “Why are we here?” and “What is this?” he asks, as he gestures to question the act of theater itself. I freeze, cold to the nature of his humor. I am not yet ready for his existential questions, retorting to myself, “I don’t know, you tell me.” But no sooner am I paralyzed with panic does Strauss begin to warm me with quick-witted quips, answering these two questions. Oh, this is stand-up, and we’re here because Strauss’s observations of the world we live in are actually hilarious.

Strauss begins engaging the audience on the topic of OCD, asking if any one has it, and inviting them to share symptoms; it is a repartee that flows comfortably. He continues with a series of jokes that traverse seemingly dispersive discussions on mental illness, emoticons, word usage, vaginas, religion, the Bible, quantum physics (guided by the words of Stephen Hawking), uncertainty, and, as a running gag, his penis. Some of his sharpest jokes succeed, delivering punch lines so far out of left field that we are hit in the gut with a full-bellied laugh. Others, notably jests at race and sexuality, fall flat. But the nature of Strauss’s fast rambling language doesn’t allow you to linger in any particular feeling for long before he’s on to his next set of points, the audience gamely following. Emphatic and engaged, Strauss mystically manages to avoid eye contact with the audience, while endearingly embracing his nervous energy with self-awareness. For example, he spends a good five minutes massaging his own pecks during his delivery, and then amusingly calls attention to the behavior by encouraging the audience to “feel comfortable with their bodies.”

While Strauss’s writing cuts sharply across the board, his tone remains tuned to a single note throughout his performance. He gives the same vocal weight to his fourth joke about his penis as he does to calling out death at the hands of religious extremism. Jonathan Libman’s direction seems unrecognizable, or perhaps it's a choice towards a lack of shape in an effort to work with the disjointed nature of Strauss’s writing. Strauss does attempt shape, picking up old threads with continuous callbacks to earlier jokes, and gathering them towards the end of the piece. Yet some threads don’t quite stretch into the conclusive bow he seems to be trying to tie. It left me with an amassed and somewhat knotted ball of humor, and the sense that the piece would have enjoyed a few more hours of rehearsal.

That said, it hardly seemed to matter, as I left the theater having thoroughly enjoyed my last hour traversing fascinating and comical pathways of Strauss’s uncertainty.