Off Off Broadway, Play
Runs through 8.26.15
VENUE: FREE FringeAL FRESCO—Tompkins Square Park at The Old Bandshell 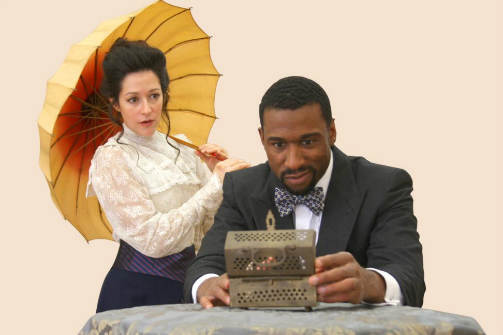 Joy Marr and William Oliver Watkins in The Merchant of Venice. Photo by Julian Voloj.

BOTTOM LINE: An open-air exploration of what justice is in Shakespeare’s The Merchant of Venice

In my final semester of college, I took a class on Shakespeare. It was pretty standard: close readings, analytical essays, month long debates over whether or not Merchant of Venice is anti-Semitic. On the surface, it’s quite a simple plot. Bassanio needs money to woo a lady. Antonio, his dear friend and merchant, backs him up on a loan from the Jewish Shylock. Shylock doesn’t trust them and makes them agree to pay a pound of flesh if they cannot repay their debts. Shylock’s daughter runs away with a Christian. Bassanio wins the girl. Antonio loses his money. Shylock demands flesh. Bassanio’s now-wife dresses as a man to save Antonio. Shylock loses all his money and is forced to convert to Christianity. Classic Shakespeare.

Of course, it’s not actually that simple, which is what makes performing The Merchant of Venice in an hour and thirty minutes a massive challenge. Not only do you have to pick how to play Shylock—as a villain, a victim, or neither—but then you must choose which parts you’re going to cut to get that message across. This is a bit of a challenge for The Merchant of Venice as all the subplots play integral roles in the major plot. Cutting down the romance between Jessica, Shylock’s daughter, and Lorenzo takes away some of Shylock’s motivation and anger. Cutting the scenes between Portia and Bassanio are nearly impossible because of the role that Portia plays in the court scene. This is the challenge that the Hip to Hip Theatre Company set by adapting Merchant for FringeAL Fresco.

Attaching the tagline “or how not to live in a multi-cultural world” to the play’s title suggests that everyone is struggling to live in Venetian society, but out of the four main characters that the company describes as “a young reveller, his devoted friend, a sheltered heiress, and an embittered moneylender,” it is Shylock that comes across as the most wronged. This is partly due to Joel Leffert’s powerful and sympathetic performance as well as how the side characters—like Gratiano (Kurt Kingsley), Salanio (Chaunice Chapman), and Salarino (Lawryn LaCroix)—deliver hateful comments as schoolyard taunts.

90 minutes is quick for Shakespeare and especially quick if you’re trying to explore all of the primary characters' motivations and struggles. Given the remarkable performance by Lefferts and the addition of a final scene in which Shylock, wearing a crucifix, emerges amidst a dissonant chord to discreetly place his yarmulke back on his head, I almost wish Hip to Hip had spent more time exploring the nature of Shylock as opposed to all four characters.

(The Merchant of Venice (or how not to live in a multi-cultural world) plays at VENUE: FREE FringeAL FRESCO— Tompkins Square Park at The Old Bandshell, through August 26, 2015. Performances are Wed 8/16 at 5:30; Thu 8/20 at 5:30; and Wed 8/26 at 5:30. There is no late seating at FringeNYC. Tickets are free and are available at fringenyc.org. For more information visit hiptohip.org.)