By The Serious Theatre Collective; Directed by Lizz Leiser and Kacie Laforest
Part of the 2015 New York International Fringe Festival

Off Off Broadway, Musical
Runs through 8.30.15
VENUE #5: The Celebration Of Whimsy, 21 Clinton Street 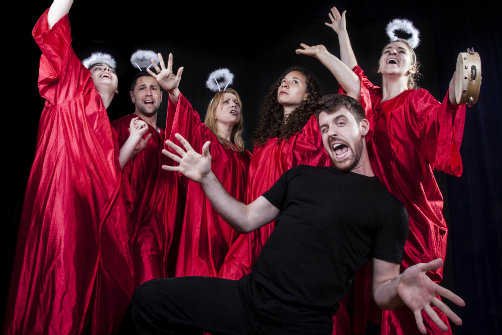 BOTTOM LINE: This evening of musical sketch comedy is ready for primetime.

The opening bit of the Serious Theatre Collective’s musical comedy sketch show The Magic Jukebox: New York City World Tour features the seven-person ensemble imitating dilapidated animatronic robots, lip-syncing along to a pre-recorded message that promises that the ensuing show will feature mind-blowing special effects. As anyone who has attended a play at the New York International Fringe Festival can attest, this message is delivered with a knowing wink. Luckily, in lieu of crashing chandeliers or flying broomsticks, The Magic Jukebox delivers twelve (unrelated) skits, written collectively by a group of over a dozen writers, that all incorporate original music. At their best, these are the kind of ingenious, well-rehearsed and hilarious sketches that you wish you saw more of on Saturday Night Live.

Taken together, the show reveals this troupe to have not only diverse musical tastes, but also an equally eclectic comedic palette, with humor ranging from the delightfully quirky to the downright bawdy. The funniest skits blend identifiable archetypes with inspired song parodies. “Prayer to the Gods of Bullshit” concerns a couple on a first date, which hits a bump in the road when the guy, hoping to impress his lady, lies about his love of politics, to which the girl asks him about his thoughts on Syria. To help him sound intelligent, the man calls on the Gods of Bullshit, a Gospel choir that coaches him on foreign policy in the style of a high-powered revival.

Other winning sketches from the team’s playful imagination envision what might happen if Destiny’s Child and Boyz II Men offered couples counseling, singing dolphins, and a man who goes on a spiritual quest after failing to open a pickle jar. However, some of the skits misfire. A scene about a paroled murderer whose interior thoughts are sung by a barbershop quartet is too conceptual for its own good, and a trio of male motivational speakers lack specificity.

The cast is uniformly amusing to watch, especially when committing to zany scenarios, and are expertly directed by Lizz Leiser and Kacie Laforest, who also provided the skillful choreography. Abby Goldfarb, vying to be the next Maya Rudolph, stole my heart with her delirious, wide-eyed stare. Sam Durant Hunter’s turn as increasingly exasperated medieval balladeer was an audience favorite.

Some of the show’s biggest laughs can be attributed to Megan Barbour’s charming costumes. If you want to dress up as the Netflix logo for Halloween, she’s your girl. The four-piece onstage band deserves mention for never hitting a false note, and I’m hoping they’re available for weddings, bar mitzvahs, and other special events.

So many Fringe shows come dripping with sentiment, or trip over themselves trying to make a political point, that it’s refreshing to encounter a show that’s just in it for the laughs. If The Magic Jukebox makes one thing clear, it’s that the Serious Theatre Collective is undersexed and over-talented, and they’re definitely ready for primetime.