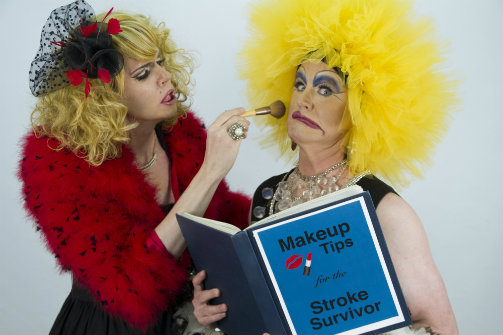 BOTTOM LINE: Two queens with a penchant for bluntness and charm serve cabaret and comedy realness.

With an unlikely premise that involves a shared husband, a comatose wife committed to a Care Center, and a young blond long-legged beauty, The Lady Winifred & Didi Show mixes comedy improvisation, original music, and live performance with sequins, wigs, sass, and a very politically incorrect humor, all while we sit and drink, in old dinner-theatre style.

Wearing a pink tulle wig a la Priscilla and dressed in 60s fashion, Lady Winifred, the survivor of a stroke followed by a coma, bravely personifies the grumpy and deliciously foul-mouthed, yet endearing, half of the comedic duo. Having been unconscious for most of the recent years, Lady Winifred is unaware of how things have changed. Didi, a tall, glamorous, and sweet songstress, completes the act personifying the politically correct and socially sensitive muse who got the better end of the deal—both were married to the same man, the self-proclaimed “Entertainment Legend” Wayburn Sassy, who personifies (quietly in his urn) the origin of Lady Winifred’s discontent and heartache.

Enriching the show is a top-notch group of musicians led by James Sheppard, a talented pianist with smooth fingers who also happens to be the creative mind behind the music performed. Joining him is saxophonist—and Lady Winifred’s favorite punchline—Kimberly Preiss. Both her sound and smile come out easily, brightening up the stage. Keeping the ensemble on tempo with clean-cut precision is drummer Joe Peri and  the groovy bass player Chris Talio.

Part cabaret, part live quiz show, part improv, and part pure silliness, The Lady Winifred & Didi Show also manages to stick a few needles in our allegedly wide open minds— a fact clearly proven by the pockets of uncomfortable silences in the audience when the jokes on racial stereotypes start to slide out of Lady Winifred’s mouth. More than just appealing to gratuitous fun at the expense of the Black and Asian American members in the audience, the two queens use humor to remind us that times haven’t changed that much and that there is still much work to be done.

Despite the fact that the arc of the show runs at different speeds and reaches highs and lows—mostly because improv-based comedy shows feed off of their audiences’ response—The Lady Winifred & Didi Show rewards us with golden musical moments such as Didi’s performance, in a tight and sensual sequin dress, of James Sheppard’s song Diamonds and Fire, and gives us loud laughs from all the jokes of, shall we say, sexual nature that are commonly associated with drag queens.

Also deserving of applause is the technical crew. The lighting design is seamlessly woven into the performance and sets the moods quite well, leaving the floor for the queens to either work the crowd or the mic and stage. The show ends with both dames joyously singing a rather direct message to all those who get in their way with the intention of slowing them down, leaving us inspired to do the same.