The Crack in the Ceiling 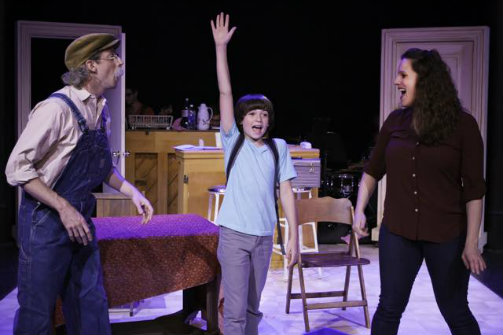 Josh Grisetti, Nicky Torchia, and Kristy Cates in The Crack in the Ceiling. Photo by Andrew Barry Fritz.

Ellen can’t catch a break, or a man, for that matter. Her most recent boyfriend just left her, she’s raising her son David on her own, and an ominous crack has appeared in her kitchen ceiling. This sends Ellen into a whirlwind calling of every handyman in the phone book to fix her ceiling, which is now leaking into every aspect of her life. Ellen flirts with each guy that comes to her door, and even invites a few of them to stay, straining her relationship with David. Amidst the upbeat melodies, there is an underlying element of sadness to the mother-son relationship, as David is fully aware of how men take advantage of his mother. Yet while men come and go, no one is able to fix Ellen’s problem. When Ellen’s fantasy of a capable man sticking around starts to come true, the risk becomes even more dangerous as this potential savoir persuades her to make an unexpected sacrifice. In classic musical theatre fashion, Ellen eventually learns a lesson; however, her story surprisingly doesn’t quite end wrapped up in a bow.

As Ellen, the accomplished Kristy Cates has an incredible vocal range and sings from the moment the show begins to the very end. With her poise and powerful voice, it’s easy to tell she’s been on the boards of grand houses in the past. Nicky Torchia is darling as David. There is a sincerity and ease about Torchia that is amazing; as David, he is a believable, frustrated boy who just wants to be heard by his mother. The Man is hilariously played by Josh Grisetti, a master at musical comedy, who serves as the rotating roster of men Ellen calls upon. His characters are funny and wide-ranging, but always grounded in the absurd truth of Ellen’s world.

James Harvey, a protégé of Alan Menken, has created a fantastic piece that has potential for larger audiences. The story is engaging, the lyrics are natural and witty, and the score is upbeat and appealing. In an hour and twenty minutes, Harvey’s characters touch on many real challenges in life —everything from coping with loneliness to filing insurance claims. Performed without intermission, I think the show runs one handyman scene too long for a one-act. My hope is for The Crack in the Ceiling to be developed into two acts, so we can learn more about David’s absent father and the relationship that caused the crack in Ellen’s heart.

Director Stephen Tyler Davis expertly leads this cast through a revolving door of characters, costumes, and musical cues. The action is seamless, the music on point, and Davis has drawn wonderful performances from the actors. The theater was very hot the evening I attended, but the story was so entertaining and alive that I forgot to keep fanning myself at times. Additionally, the show’s music director Will Buck, with the help of his fellow musicians, supported the cast perfectly and never pulled focus.

Due to the nature of the beast, the Fringe can be a challenging platform for any production, especially a musical with many moving parts. The Crack in the Ceiling is a testament to theatre-making at its very best and is a Best Bet for anyone who enjoys a great musical with a lot of heart.