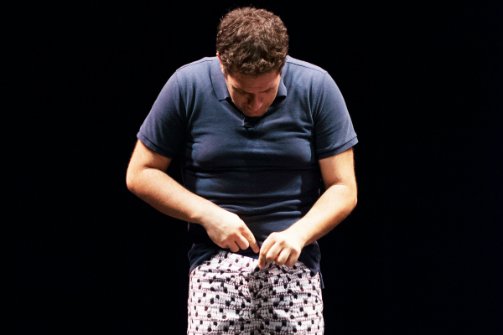 BOTTOM LINE: A late-night SNL-style comedy about the shortcomings and insecurities of the male “package.”

Small Membership tells the awkward and obstacle-laced story of a man named Matt and a little problem that lies in his trousers: four inches worth of a problem to be precise. From prepubescent love awakenings, to the awkward and sometimes uncomfortable world of puberty, to the heartbreaks and fleeting lives of our modern age, Matt is forced to learn the hard way that the best of confidence does not come from the outside.

As written and performed by Mark Della Ventura, Matt has a lot of baggage and very little strength to carry that baggage into a heightened and engaging battle. He has written a play that is full of very memorable one-liners, sometimes irreverent set-ups, and some unexpected turns. And while the script shimmers with the fast-paced humor that could be found on the pages of an SNL script, there is sometimes very little emotional engagement with the audience for the show to progress forward. Matt is put into some situations that will be all too familiar for many of us: first love, first rejection, first humiliation, public embarrassment, heartbreak.

Della Ventura delves into these situations with a Lena Dunham-esque sincerity that ties some of the humor together very well. There are many laugh-out-loud moments, and the script is very memorable when it crosses the line between irreverence and honesty. However, for as much vulnerability and self-deprecating humor as the character of Matt is able to garner, he never quite goes from dweeb to fighting underdog.

The true strength in the play is ultimately the way Della Ventura and directors David Sirois and Gabe Hammad have found a way to deliver some very funny material. Some of the laughter produced by this strong team can match any night at your local comedy club. Even if the story does not gain steam, the laughter will ultimately win you over.