She-Rantulas from Outer Space in 3D! 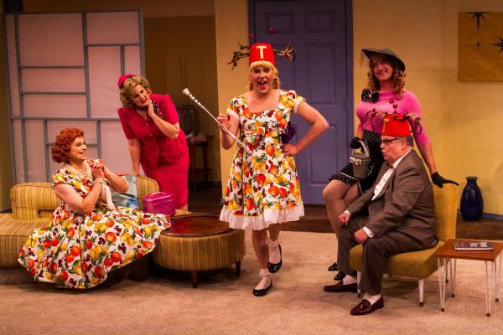 BOTTOM LINE: Taking cues from camp classics such as Psycho Beach Party and Die Mommy Die, She-Rantulas from Outer Space in 3D! manages to up the game in a hysterical flat out incursion on American exceptionalism and gender stereotypes.

As a fan of the horror genre, from its title alone I was excited to see She-Rantulas from Outer Space in 3D! at this year's Fringe Festival. But when I realized that 4 of the 5 performers were going to be in drag, I felt a bit worried. All too often, I've seen camp takes on this side of the horror genre that turned out to be nothing but glorified drag shows. This was most certainly not the case with this brilliant production.

In She-Rantulas we are transported to McCarthy-era America, where demure housematron Betty (Phil Johnson) is trying to find a home for herself and her nearly eight-year-old daughter, Suzie (Tony Houck).  Betty is concerned about the behavior of her child, a fear that is only exacerbated by the disappearances of men and women all over town. Without giving away too much, it’s safe to say that her apprehension is well-founded.

SPOILERS IN THIS PARAGRAPH: With giving everything away (and there’s really no way around it when discussing this show), Suzie is indeed terrorizing the neighborhood.  She slaughters pretty much every female in town (the six of whom we see are played to comic perfection by Samantha Ginn) while the men are kidnapped and forced to undergo sex changes and impregnation by aliens. And therein lies part of the genius of the piece; for all of these campy housewives are, in fact, men. The rest of the genius lies in backhanded comments to the audience that tear a hole through right-wing Americana (my personal favorite being when Suzie has grown several extra limbs, a character proclaims ‘I’ve heard of the right to bear arms but this is ridiculous).

NO MORE SPOILERS: Despite the adulation above, She-Rantulas is not without its flaws. Once the audience is let in on the joke, scenes tend to get a little long-winded and repetitive. The cast makes up for this with their assembled comic genius, but with a bit of a tighter rein this could be a real contender for an extended run (that’s basically me saying that I’d love for them to trim it and get a semi-permanent space to perform in so that I can send all my friends). At the end of the day, it still surprisingly transcends the constraints of its genre.