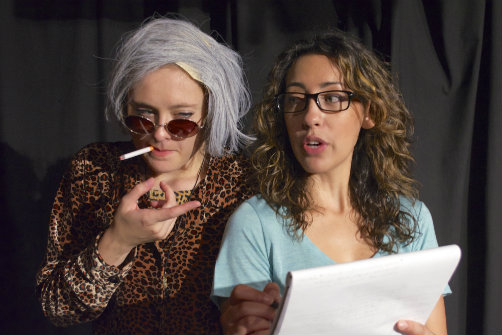 Olga Elliot and Brandi Bravo in Serial: The Parody! Photo by Tori Shipley.

BOTTOM LINE: Serial: The Parody! is a fun, wacky exploration of the Serial podcast that fans will enjoy.

Saying that the Serial podcast swept the nation by storm just might be an understatement. There are podcasts about the podcast, SNL made fun of it, and now it’s been etched into one of the oldest art forms: theatre—specifically, sketch-based comic theatre, in Serial: The Parody!, written by Olga Elliot and Brandi Bravo. It even opens with the same iconic theme music. For those who don’t know the podcast, in its first season it followed the murder of Hae Min Lee in Baltimore, MD, and the trial and conviction of her ex-boyfriend, Adnan Sayed.

Serial: The Parody! follows Sarah Koenig, the host of the podcast (played here by Bravo), and her sidekick Dana (played by Elliot), as they investigate the crime. Picking up somewhere near the beginning of the podcast, the play explores the idea of neutrality. We discover that Koenig is deeply committed to Adnan, but in more of a romantic and sexual way—more like the opposite of neutral. And this Adnan, played by Aldo Uribe, isn’t just any version of Adnan. He’s muscular, with slick black hair and a penchant for knitting and cooking lobster. He speaks on the phone (because he’s in prison) in a seductive, yet overly casual tone—considering his circumstances.

The play's sketch-based feeling holds for the entire piece. Moments reoccur throughout: Jay (a major suspect, accomplice, and Best Buy employee, played by Jonathan Braylock) comes out, in a mock-Best Buy uniform, and tells us about a product they sell. Braylock’s Jay is cheerful, but the pitches are banal and hilarious. This sense of day-to-day mediocrity is punctuated by moments where Jay describes how this product could be used for murder or harm. The lights turn red, the music grows dark, and his face contorts angrily; then, all is back to normal, and Jay exits. While these moments were some of my favorite in the play, they could have been much stronger if not used regularly as a kind of comedic punctuation.

Other takes on Koenig’s adventure include Koenig confronting Detective MacGillivary, the original detective of Adnan’s case; taking on the ghost of Hae Min Lee; and failing to save psychic Barry Mooner. Perhaps the most striking moment of the play occurs when Koenig and Mooner wander in the park where the murder occurred. Koenig has brought Mooner to help her discover more about the crime, but the scene ends with Mooner dying on the ground while Koenig interviews him. This felt like a strong, hilarious, well-acted commentary on the faults of the original Serial, and I found myself thinking about the implications of this perspective. Other comedic moments throughout the play lacked this perspective and insight, though many of them were still funny and often well done—featuring great sound design by Mark Van Hare and strong lighting design by Jason Fok. MacGillivary, Lee, and Mooner (and others) are all played skillfully by Elliot. Elliot’s quick changes and varied performances bring a lot to the wacky, silly energy of Serial: The Parody!

For those unfamiliar with the podcast, there might not be enough background information to bring you up to speed. For fans of the podcast, Serial: The Parody! will bring giggles, fun, and probably nostalgia for Sarah Koenig herself.