Off Off Broadway, Play
Runs through 8.29.15
VENUE #2: Flamboyan Theatre at the Clemente, 107 Suffolk Street 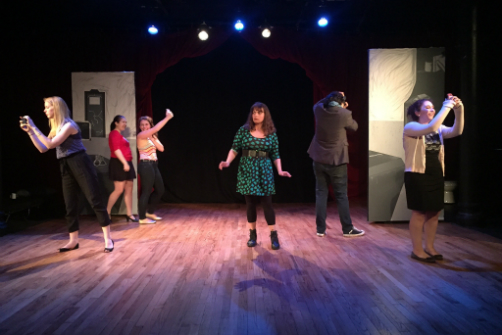 BOTTOM LINE: A comic book-type show with a guy and a girl who have to stop a villain from trying to drain people of their energy in order to take over the world.

Pickles is a crime-fighting dog. Everyman (Alexander Rotella) is his neighbor. Everyman clarifies that he is not a superhero, because he has no super powers, but simply someone brave who runs toward the perpetrator. On one occasion in an alley he happens to encounter Annie (Laura Minadeo), an inebriated cosmetology student, attempting to pick up some guys with her friends. Waking up at Everyman's apartment after passing out, she becomes entwined in his current case. The Decafinator is loose and attempting to drain people's energy so as to have mind control over all of humanity. As Annie spends more time with Everyman, it turns out they work well together when they aren't fighting like cats and dogs.

A plot like this involves battles, and it is fun watching Rotella's work as a fight choreographer. These sequences are interesting and, for the most part, believable; if only there would have been more of them. The Flamboyan is quite spacious, and thus conducive to fight scenes (not all Fringe venues might be so accommodating). It works out well for this production.

There is some cheesiness ingrained in the show and I wished the production team and cast would either embrace it more or let it go completely. The potential is there in either case. The story begins with a nod to Peter Parker becoming Spiderman after being bitten, with set pieces that support this storyline—but then Pickles turns on itself and into its real story. And that's a good thing, because we otherwise wouldn't meet Yeta (Zach Searle), the owner of Pickles, who is integral to defeating the villain in the end. He's also very entertaining. Searle steals the show, despite only being in a couple of scenes.