Petition for an Alien Fiancé 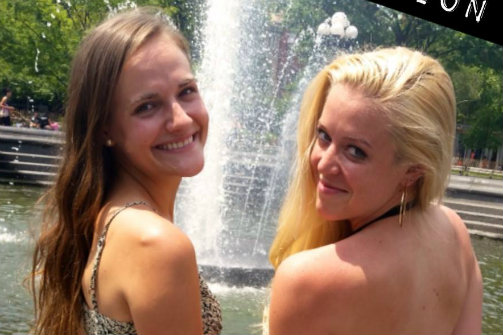 BOTTOM LINE: A lesbian couple’s seemingly perfect relationship struggles when one is not a citizen of the United States, and the only option to stay together means staying together forever.

When seeing a new play, one can either do extensive research beforehand, or go with a blank slate and no knowledge about the production. Going in cold, one might assume (as I did) that Petition for an Alien Fiancé would be a bizarre story of human and alien galactic love. But of course "alien" has another meaning, and Harry Buckoke's play is actually about two people, one who is not a United States citizen, who must endure a strenuous governmental process in order to legally marry and stay together in one place, in one country.

The play focuses on the relationship of Silvia (Elizabeth Conway) and Amber (Rowan Spencer). Silvia, a Canadian food photographer, has been out of the States for quite some time itching to get back, and finally does with a student visa. She’s a free-spirited, somewhat outlandish character, while girlfriend Amber takes on the appearance of the more casual and put-together type. It’s a cute introduction to the opposites attract couple. However, after reuniting in the States, the stress of finding a job so Silvia can switch from temporary “student visa” to more secure “work visa” hits the couple hard. After little contemplation, Amber proposes an idea which will entail good security for her Canadian native girlfriend: a marriage proposal. Eventually the young couple agrees to go forth in their pursuit of marriage. Unfortunately, the government doesn’t exactly make the whole legal process of marrying a non-citizen easy. Without spoiling the ending, the plot trudges on as what seemed to be a perfect relationship changes when the going gets tough.

What’s notable about this tale of love and difficulty is that it centers on a lesbian relationship without the systematic disadvantages specific to homosexual couples. Rather than focus on the explicit adversities that two women being in love no doubt have to face, Petition for an Alien Fiancé aims its attention at the troubles of seemingly healthy and longstanding relationships, albeit those which exist across borders.