Paraphilia: Everyone Has a Sexual Disorder 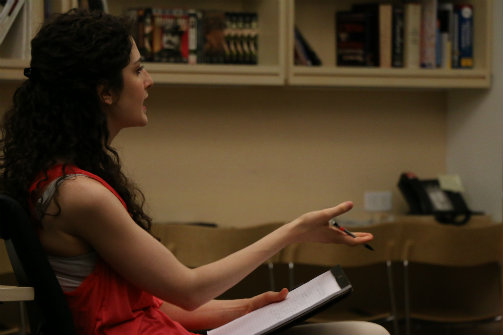 BOTTOM LINE: Strong acting, compelling characters, an inventive script, and polished staging make this play a must see for FringeNYC-goers.

There is something so quintessentially New York about the alienated and sexually dysfunctional urban characters in Paraphilia that it is hard to believe that in actuality it was written by a Canadian playwright (who now resides in NYC and is working on his MFA at the New School alongside director Kristin J. Heckler)... and that it originally debuted at the Montreal Fringe Festival. The main character Margo (Sarah Rosen) is a freshly credentialed sex therapist attempting to build up a private practice. Among her three regular patients are: Ruth (Kelsey Foltz), a woman who is unable to have sex due to suffering from Vaginismus (a fear of having anything in her vagina); Jonah (Nic Marrone) who suffers from premature ejaculation and a lack of confidence around women; and Caleb (Daniel Morrison), who is aroused by large crowds which leads to a sexual compulsion to masturbate in public.

While she is trying to solve her clients’ problems, Margo is suffering from her own wariness towards sex and dating. When she meets Brian (Will Brosnahan) at a bar, she is repelled by his blatant sexual interest and clumsy pickup lines, but the chemistry between the two is immediately evident in their banter. On another evening, the two cross paths again, and after Margo describes Caleb’s legal problems Brian offers to find him a lawyer, which leads to him obtaining Margo’s number, thus launching the beginning of their courtship.

Part of the success of this Paraphilia is how streamlined it feels, despite being in a less than ideal venue, and in a festival where many productions have difficulty with their sound. The minimal props and scenery used in the production are well augmented by excellent sound design, which easily evokes differing settings, as well as lighting that aids in transitioning through each scene. The skilled delivery by the actors also enables them to overcome the hindrance of loud fans and an air conditioner, something that marred some of the other productions I have seen in this venue.

In addition, the show is well cast, with each actor fully embodying their characters under the guidance of director Kristin J. Heckler. Although Jonah and Caleb are surely laughable and wacky characters, they are portrayed (and written) as deeply conflicted beings rather than just cartoons made for quick laughs. Although we may laugh at their problems and personality quirks, we also empathize with their pain. Rosen and Brosnahan are both enigmatic in their performances and display convincing chemistry as a couple. Each of the actors performs with the sort of polish and confident presence seen in well-seasoned stage actors. I hope this production of Paraphilia appears in NYC again after the Fringe Festival.