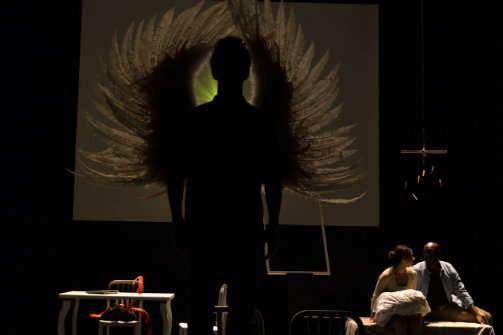 What is the best way to handle grief after losing someone near to you? That is the central question posed by the cast of Painting His Wings. The play cleverly begins with our central character, daughter Abellona (Schuylet Press), assembling her family at the dinner table for board game night. However, it’s soon made clear that their son, Christopher (Jake W. Davis), is no longer alive. The play examines how the Whelan family deals with the absence of their beloved son. We see patriarch Paul (Ciaran Byrne) desperately attempting to hold the shattered fragments of what used to be, have our hearts broken by mom Willa (Alison Scramella) finding companionship and release from an unconventional source, and relive the last night of Christopher’s life through his sister Abellona’s eyes.

Playwright Sinead Daly presents us with a solid dramatic formula—a loving, presumably normal family that is shaken to its core when forced to deal with tragedy. However, as reliable as the concept may be, it isn’t by any stretch of the imagination a new one. I couldn’t help but think of Painting His Wings as almost a non-musical Next To Normal. That’s not to say that Painting His Wings isn’t a noteworthy piece on its own. Daly breathes new life into old convention by adding technology into the mix—giving Willa an online platform to connect to others and overcome her grief. These technical elements throughout the performance add external characters and shape the almost otherworldly existence of Christopher in the story. The way in which we revisit Christopher’s last night alive is also incredibly well done. Daly and director Heather Lanza give us small snippets of one long scene, broken up into fragments in between the present day scenes. Each portion gives us just a little more information than the last, until we finally understand the full story. Smart lighting and sound elements aid in shaping this concept.

But it is Press who really shines in Painting His Wings. Immediately likeable from the first time we see her, she surpasses the trap of simply being a “cute little girl” and elevates Daly's already high-quality writing. Press engages in such a way with the actors around her that even watching her face as she takes in what other actors give her is absolutely entrancing. She is fully present throughout the piece, and a joy to watch as she navigates emotions and concepts challenging for her character’s age. A separate shout out goes to Byrne for his charming and incredibly honest portrayal of Paul Whelan.