Only A Paper Moon

Off Off Broadway, Play
Runs through 8.29.15
VENUE #2: Flamboyan Theatre at the Clemente, 107 Suffolk Street 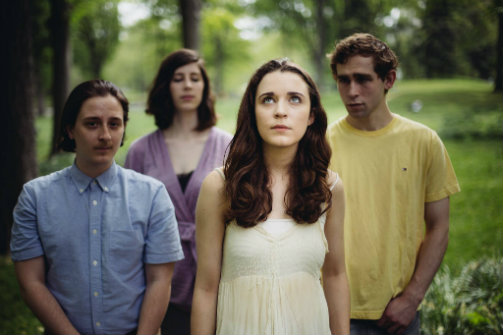 Who’da thunk 1940s Hollywood movie magic would also work in the theatre? Maddie Hill did. The playwright of Only A Paper Moon manages to weave cinematic glamour into her script to tell a story about the hardships of growing up and entering adulthood. The catch: it’s done through the perspective of Wynnie, an eighteen-year-old girl who’s not quite smart. Or is she?

After losing her mother on the day of her 18th birthday, Wynnie (Fiona Robberson), a girl from Texas with an I.Q. below 70, is given two weeks to prove to a judge—and to herself—she’s capable of being her own person. Already here we’re presented with the contradictions that represent the play’s central point: normalcy is relative and being an adult shouldn’t just mean to stop being a child. Joining Wynnie in her attempt to be independent is Tommy (Cody Buege), an eighteen-year-old boy who appears to be somewhere in the Autism Spectrum and lives with his mom. Best friends with Wynnie, he sees in her situation his chance for independence. As they both talk—making up some of the wittiest and refreshing dialogues in the play—they mention Chris (Danny Zuhlke), an assistant librarian and possible ally. As the story develops, these relationships become movingly intricate. Completing the plot is the slightly stuck up yet amiable Amber (Jillian Smith), the social worker who deals with Wynnie’s case. Amber appears as the responsible law-abiding adult who initially believes in the system and comes to realize its limitations and weaknesses, and serves as a sort of surrogate mother figure who will eventually also fail. Only A Paper Moon allows us to witness the journey of a girl who lives between a world of fantasy and the reality she can’t seem to grasp—by will or ability.

Robberson gives an honest portrayal of the soft-hearted, loving, and strong Wynnie, holding our attention from the first to the last second of the play. Her talent and artistic sensibility handle both a deceivingly simple dialogue with the actors inside the TV and her scenes with Chris equally well. As the logical and serious Tommy, I see in Buege the makings of a great actor. Tommy's interview scene with Amber the social worker is one of my favorite moments. Buege's telling eyes and hands give discreet signs of warmth in a character whose brain is reigned by logic and pragmatism. Zuhlke gives us a fun and at times charming portrayal of Chris, the assistant librarian. Zuhlke and Robberson manage the transition between Chris and Wynnie and their cinematic alter-egos Christopher and Wynona rather well. Every time Zuhlke explores his lower vocal range and raises his gaze into the light, and Robberson changes her accent and blossoms as Wynona, they are right on the money. Also deserving of attention is Smith performance; her work is at times so precise and clear it might go unnoticed.

Design wise, the work of Ashil Lee and Tung Jit Yang is simple and effective. With the use of panels and a few props, we’re given a variety of convincing settings. The costumes and the lighting design also give us clear clues as to the characters’ personalities and place in the world. Hill's writing is sensitive, unveiling tenderness through small gestures (like how Chris uses fabric softener when doing Wynnie’s laundry) while creating witty and refreshing conversations, giving the story the range of emotions it seems to deserve. Sharing the directing credits with Hill is Arsalan Akhavan; the two put the story together and give it a creative input that boosts the visual magic and theatricality of the night. However, the length of the performance seems to dilute the play’s dramatic urgency and poignancy. And the shift in focus from Wynnie's battle with the court to her emotional journey and consequent maturing sets up one thing and then presents another, thereby frustrating expectations a bit. That said, the sad beauty of Wynnie’s ride partially compensates for this.

The story ends in an unassuming way, leaving the audience to decide if it was hope that came after five Mississippis or the beginning of another lonely journey into her adult and new life. Only A Paper Moon definitely deserves attention for its clever and sensitive script, good—at times impressive—acting, and clean tech work. All in all, definitely one of the quality shows at the Fringe Festival this year.