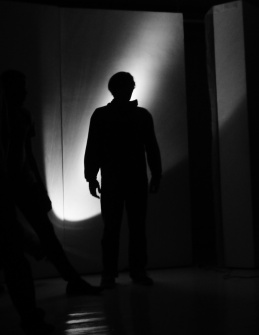 BOTTOM LINE: With everything including LGBT struggle, mental illness, addiction, and terrible baking, this theatrical free-for-all comes together as a hopeful, at times sorrowful, glance inside the minds of young artists.

I have to applaud the massive company of more than a dozen artists on stage, and at least half as many back stage, who created this ambitious production of Old Haunts. This is a fresh company with a lot of earnestness, and it truly is inspiring. The moments of the script that lack direction or purpose are redeemed by others that are insightful, poetic, and honest.

Old Haunts follows Colorado native Mark Robbins (Levi Satter) from his home town of Bolder to Columbia University throughout his fall semester. Mark has started to hear voices and interact with people who aren’t really there. As if sleep walking through life, Mark is emotionally blind-sided by everything: running into his ex Alice, seeing his estranged best bud Clay (Par Juneja), dealing with his distant dad, and protecting his roommate Chris’ (David Feliz) dark secret. Perhaps Mark is starting to totally lose his mind, but by the second act a hopeful encounter with a professor of poetry opens up the proverbial door for Mark. We begin to watch him learn to deal with all the noise in his head, his life, and his heart.

There are moments of sublime realness in Old Haunts, which Emily Simon both wrote and directed. The seamless blending of poetry reading into dance recital, and the subsequent mashing of space and time, is supremely imaginative. It’s executed with only the slightest bit of hesitation by the ensemble. A scene-stealing Juneja as Clay nails a sorrowful yet funny monologue sharing what it’s like to go through young adulthood feeling that you have no prospects, special skills, or intellect. Feliz is both charming and heartbreaking. He gave me chills leaving a voice mail plea for help to his estranged father. The chemistry between Satter and Georgina Lawry, as Mark and his best friend and admirer, is genuinely sweet.

I wouldn’t fault this production for the team’s age. To quote The Breakfast Club, “When you grow up your heart dies.” This youthful bunch are baring a lot of pain pulled, no doubt, straight from their lives. Not only that, they’re using all of their skills of expression and experimenting with forms. It takes a lot of courage, and I’m not just being sentimental. Why not support the work of young artists? Their pain is present, their play is creative, and their message is true.