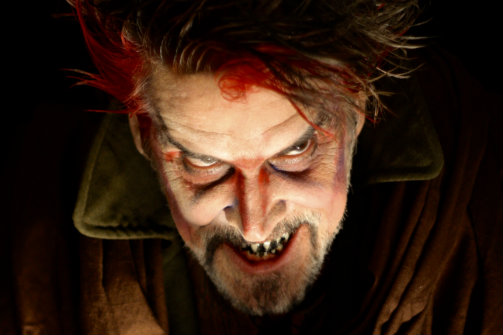 BOTTOM LINE: An obscure allegorical fable about the futility of violence, brought to life in an exceptional revival.

Set in the 15th century, Night with Guests is a dark tale about a family held hostage by a ruthless, wicked “Guest.” The villain intrudes on the house, intending to rob and kill the family of four. The Man and Wife pretend to treat him as an honored guest and plead with him to spare their lives. However, the Guest is unrelenting and threatens their children, Boy and Girl, with death. In desperation, the Man tries to lure him away with the promise of a chest full of gold, but the Guest sends him to fetch it alone, leaving the Wife and children at home. While the Man is away, the family tries every tactic they can to stay alive, losing hope of his return. Meanwhile, a neighbor comes by to alert the family of an intruder in the area and through a tragic series of events, blood is spilled and the result is irrevocable.

At the top of the play, the actors enter in silence and help each other to put the finishing touches on their wardrobe. Once ready, the cast, accompanied by percussionist Juan Herrera, launches into a metered speech for the next 45 minutes that is as remarkable as it is riveting—the entire text is performed, without much pause, in rhyming lyrical verse. Although highly stylized throughout, the story concludes with a grounded, sobering lesson about the fruitlessness of bloodshed.

Playwright Peter Weiss was an important twentieth-century multidisciplinary artist and wrote Night with Guests in 1963, as a dramatization of grim fifteenth-century European street ballads. It was a turning point in Weiss’ writing style (soon after, he composed his most renowned work, Marat/Sade). Expertly directed by Bill Burford, this production unfolds in a boldly theatrical, yet completely engaging feat of storytelling that includes elements of Kabuki, Punch & Judy shows, and fairground style performance.

The acting is strong across the board. David Logan Rankin, with his threatening stature and booming voice, is effectively frightening as the malicious Guest. Ethan Angelica is compelling as the Man, a loving father who is determined to protect his family; Melissa House gives an especially poignant performance as the Wife, as she fears her husband is dead and chooses to offer herself to the Guest to protect her children. The Boy and Girl, played by Jack Herholdt and Mary C. Davis respectively, are charming as scheming, playful children, and Evan Zes is brazen and dauntless as the neighbor.