Night of the Living 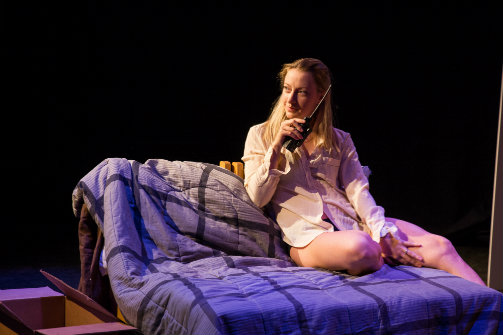 Belle Caplis in Night of the Living. Photo by Michael Bernstein.

BOTTOM LINE: Well acted, well written, and well directed, Night of the Living is a must-see.

We love zombies. I’m skeptical of our obsession. But what makes Dave Lankford’s new play so exciting is that its main thrill from which the name is borrowed goes entirely unmentioned for a good deal of this story. This enormously well-constructed play plays out as a kind of sparse mystery where we gather clues. Instead of gory, brain-eating monsters we’re instead treated to some phenomenally acted relationship drama between Mia (an exceptionally gifted Belle Caplis) and Marshall (an unusually absent Eric Kuehnemann).

It’s their anniversary and baby/toddler/child Henry is sick. On the news is a notice of an illness known as Zada that is ravaging a South American country. (Yep, zombies.) Mia is concerned Henry has it, Marshall is less convinced and more concerned with a phone conversation he overhears between Mia and a “Jim.” (Yep, cheating.) What’s wonderful is that this takes some untying to figure out. And now looking back at it, this entire play could have taken place in one particularity hellish day or even an entire year or more (which anniversary?) Lighting designer Jake Fine and director Jenny Beth Snyder seldom place the two in the same place, traversing back and forth between two specific yet broad looks as we settle on where exactly we’re at in the timeline of events.

The effect it creates is a wonderfully jarring confluence of separation and intimacy. It’s not about the never seen or heard from zombie apocalypse. It’s about two people who need each other, whether they know it or not. In quick succession of different times and place we’re treated to such lines as “Don’t leave me, I can’t do this” “I fucking hate you” and “I have to go.” Intriguingly, Caplis spends a good deal of time alone in some compelling moments that would have been tedious with a less accomplished actor—Kuehnemann somewhere else in the building on the other end of walkie-talkie. Also, it’s surprisingly funny. And that’s a skillful bit of playwriting.

Lankford’s writing is juicy for an actor and Caplis and Kuehnemann seem right at home. What I did find troubling is that because we don’t get to see them outside of trauma, I’m never able to fully believe they belong together and I’m never fully routing for their survival as a couple. I wished I was. But perhaps it’s the intent: how humans function in midst of disaster. In these cases a significant break up can seem on par with getting eaten by a zombie. I’ve said too much already. See it.