Love in the Middle Ages 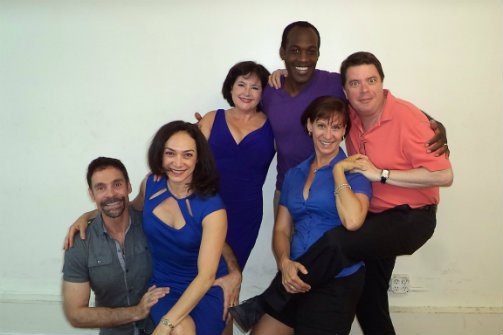 BOTTOM LINE: Just because you’re over 40 does not mean your love life is over!

In these shaky times of Tinder, Grindr, and Craigslist, the dating scene can be daunting for anyone who's looking for an LTR. But for the over-40 set it can be down right disheartening. At least, this is how it appears in the new musical Love In the Middle Ages with a book by Eric Kornfeld and Jeffrey Jackson, music by Michelangelo Sosnowitz, and lyrics by Kornfeld. The action centers on a group of forty-somethings who gather at the JCC on the Upper West Side of Manhattan for the weekly “Over 40 Single Mingle." Presided over by divorced emcee named Richard (Dave Konig), tonight’s group includes an HR representative named Jane (Marci Reid), a widowed trophy wife named Nina (Gabriela Garcia), a man dragged by a pushy sibling named Michael (Michael Givens), the smooth-talking investment banker Dave (David Rappaport), who’s quick with a pick-up line, and finally Sandy (Mimi Bessette), who's a regular. Each brings with him or her a hefty load of personal baggage and a desperate (some more than others) agenda that makes for a bumpy ride on the "getting to know you" train.

With over 50 singles in a room there is bound to be drama, and the production does not disappoint. There's Nina being harassed by Richard who is spewing an endless slew of one-liners, and Sandy falling for Michael who happens to be gay, not to mention Jane's delusions of a marital reuniting with her ex. In fact the evening is so full of angst that it feels more like a high school dance than a middle-aged mixer. Even the social stereotypes are in place, bringing to mind the casts of John Hughes films like The Breakfast Club. The inclusion of an “it girl,” a “jock," and a "geek” may feel trite, but thankfully the writers take a much more honest approach when diving deeper into each character's unique set of post-pubescent personal problems.

As directed and choreographed by Lisa Shriver, the cast struts and strides around the theatre/bar venue, giving performances that make them seem more youthful than the play suggests. While Love in the Middle Ages fails to break any new ground, it succeeds in offering a feel-good evening of song that is decidedly and (mostly) glad to be grown-up.