Love at the End of Time

Off Off Broadway, Play
Runs through 8.30.15
VENUE #2: Flamboyan Theatre at the Clemente, 107 Suffolk Street 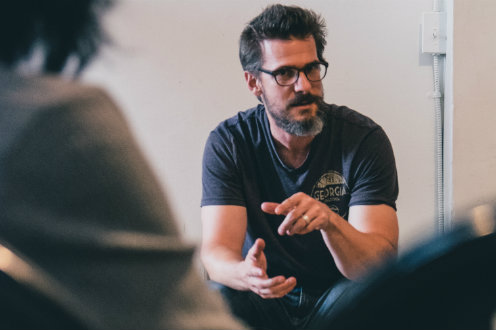 In a scene in Love at the End of Time, two characters sit on a park bench discussing Edward Albee's The Zoo Story, a play about two characters sitting on a park bench. Hannah (Gigi Neil), who, like Michael (Adam Swartz), is keeping an eye on her son, asks Michael how he would rewrite it (it's his favorite) for a modern audience; what he describes is the play we are watching. It's a bit explicit, but since not everyone has seen The Zoo Story, it's helpful for putting Love at the End of Time in context. Swartz not only acts, and takes on the challenge of rewriting Albee, but he also helms the production. The writer/director/actor combo can be a red flag signaling self-indulgent theater, but Swartz directs with a sensitive hand, getting some moving performances out of his cast.

Michael and Hannah's regular park bench meetings, as their sons play in the park, are interspersed with scenes of two other pairs of characters. Lisa (Olivia Horton), a patient at a mental hospital, and the night nurse Walker (Jonathan Gundel) find comfort in each other. John (Mark Doherty) desperately needs a job and Llyubov (Janice Hall), an older woman who needs her bathroom remodeled as quickly as possible, might be the answer. As you may imagine, the three stories are connected.

The simplicity of set designer Danielé Perna's white benches work well here as they allow actors to stay on stage during others' scenes without distracting too much. Swartz could tone down the metaphors (snakes are a big one), but Michael is correct about the effectiveness of cutting to different stories. Going back and forth between the three stories builds intrigue and breaks up the monotony. You want to see how each plays out.