Written and Directed By Garrett A. Heater
Produced by The Covey Theatre Company
Part of the 2015 New York International Fringe Festival

Off Off Broadway, Play
Runs through 8.18.15
VENUE #2: Flamboyan Theatre at the Clemente, 107 Suffolk Street 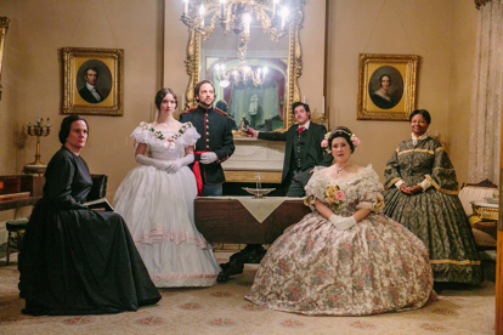 BOTTOM LINE: A historically intriguing yet somewhat shallow depiction of the assassination of Abraham Lincoln.

Presented as a memory play, Lincoln’s Blood (written, directed, and co-starring Garrett Heater) chronicles three parallel plot lines depicting the action leading up to, and resulting from, the assassination of Abraham Lincoln. We observe spitfire Mary Todd Lincoln (Kate Huddleston) as she prepares to accompany her husband to that fateful production of Our American Cousin, and the slow descent into madness she faces as a result. Her narrative is elevated periodically with the appearance of the modiste and confidante to Mrs. Lincoln, Elizabeth Keckley (Karin Franklin-King). Meanwhile, we become privy to the courtship between Clara Harris and Major Henry Rathbone (played by Maya Dwyer and Garrett Heater respectively). The two guide us through their own arrangements for that doomed April 14th production, and their struggle to maintain some semblance of a normal life after experiencing great horror. Finally, we fade in and out of the memories of Mary Surratt, told from the prison cell in which she lives the final twelve hours of her life, recounting her relationship with one of history’s most notorious assassins, John Wilkes Booth (Ryan Santiago).

Heater’s play soars in presenting us with a dramatic interpretation behind one of the most iconic occurrences in US history. A human face is given to names often glossed over in classroom textbooks, like the mundane and often gray presentation of Mary Todd Lincoln. Huddleston shines the brightest, depicting Mrs. Lincoln with the strength required for the role, but with a delicate connection to reality that never once made me question her commitment to the circumstances of insanity.

While Lincoln’s Blood demonstrates top-notch acting, a genius ability to move the plot back and forth in time, and an allegiance to historical authenticity, it doesn't always inspire creative interpretation for the audience. The play moves from tableau to tableau, showing us exactly what we should see, and exactly how we should feel. There are no lingering moments of emotional ambiguity, and I didn’t feel the need to dissect what I had seen upon leaving the theatre. I found myself thinking at several moments that the piece plays out like an extended—though much better acted—History Channel reenactment. Obvious themes pertaining to grief, loss, insanity, regret, isolation, hate, and love can be observed, but they are presented so quickly or with so little depth, moving the plot along at times feels more important than exploring any true human condition.

Fans of a well-performed historical drama will sing the praises of Lincoln’s Blood, while those searching for thematic complexity might not feel fully satisfied.