Hell Is For Real 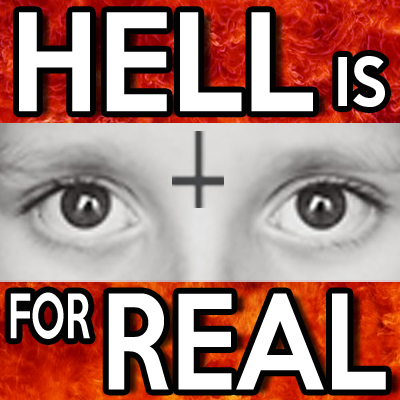 In Gary Apple's new musical comedy Hell is for Real, Richard (Christopher Sutton) is summoned to the principal’s office to meet with members of the Hate Crime division about the rather troubling artwork his six-year old son, Davin (Madeline Kolker), has been turning in. Seemingly harmless stars align to form a pentagram, a lovely meadow conceals the head of Baphomet, and underneath a black light, a painting of an adorable puppy reads “HELL IS FOR REAL.” Forced to face the evidence, Richard recounts his fantastical journey deep into the bowels of Hell for the not-quite-disbelieving Det. Zanderhoff (Richard Costa) and the audience.

If that’s sounds silly, well, that’s because it is. But what else would you expect from a musical with big ensemble numbers like “Selfie with Charles Manson” and heartfelt ballads titled “More Than Cheese”? Richard’s journey is hilarious, from Davin’s coma-inducing fruit cake snack to a guided tour of Hell’s endless hallway led by the infamous banjo-playing, large-handed bogeyman Carl (Zak Risinger). Hell is for Real teeters on the line between camp and farce. The comedy ranges from Richard’s audible confusion at the presence of choreographed musical numbers—and his own involuntary involvement in these dances—to God allowing Charles Manson past the pearly gates because “dem’s da rules.”

Occasionally, the musical is unable to balance gracefully on this camp vs. farce tightrope. At one point, Richard discovers that the Dark Priest of the Brotherhood of Satan is in fact Davin’s bumbling principal (Tom Carrozza)—a hilarious twist made problematic because Richard uncovers it in a flashback, after already having an interaction with the principal in which the two characters fail to acknowledge the issue at all. Moments like this keep the tension high and the plot twists unpredictable, but it also causes the timeline to get jumbled as past and present blur together.

Despite the confusing sequence of events, the ensemble keeps the audience reeled in, particularly vocal powerhouses Lori Hammel and Vasthy Mompoint. Richard’s odyssey may still have some kinks to work out, but that doesn’t stop Hell is for Real from being a nonsensical good time.