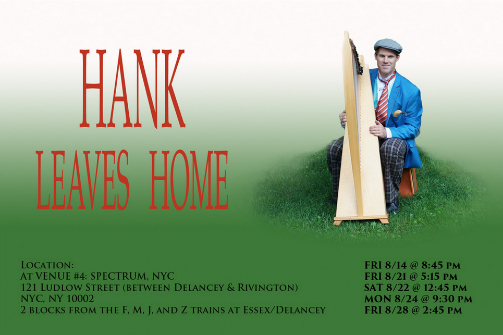 Hank enchants his audience from the moment the doors open. Ever present on stage under modest lighting, Hank ushers in his prospective friends with beautiful melodies that softly stream from his harp under the pre-show buzz of whispering and riffling of program pages. The light and sound booth lives at audience level inside of a corner kitchen in the studio-apartment-turned-performance-space where shelves and shelves of books and CDs cover the walls stage right and left of the harpist. As I settled into the corner of a comfy couch it felt appropriate to stretch out my legs and hoist them up onto the back of the couch in front of me, though I didn’t. Spectrum’s homey ambiance provides the perfect setting for Erik Heger’s intimate performance in Hank Leaves Home, a one-man “theatrical concert” directed by Leslie Felbain and created by Heger and Felbain about a homeless harpist desperate to create human connections but too overcome with nervousness and emotion to make the leap from reverie to reality. Heger’s performance is strong as he uses elements of clowning and physical comedy to charm the audience into his world that oscillates between dream-like fantasy and heartbreaking disillusion.

Taking up space (Heger measures at least six foot two) and dressed in a button down shirt, cummerbund, bright blue vest and white jacket with what looks to be a pineapple top sticking out of its pocket, Hank over excitedly shows us the contents of his colorful briefcase and introduces us to Holly, his harp and trusted companion. The next 50 minutes are colored by quirks and tangents with some confusingly suitable audience participation, selfies, and a hilarious improvised story involving two tadpoles and a water monkey supported by psychedelic glissandos on the harp.

A talented harpist in his own right, (Heger has opened for Roberta Flack, Lou Reed, and David Johansen at the Apollo Theater), Heger’s beautiful renditions of classics like “Here Comes the Sun,” make Hank Leaves Home worth seeing. The show’s narrative content, however, falls a bit short. Hank Leaves Home is a show that can and should be developed into a longer and fuller story but this iteration will satisfy the audience member looking for something short, light, and fun. I have a feeling there’s more to see from Hank and Holly, though. And much more to hear, too.