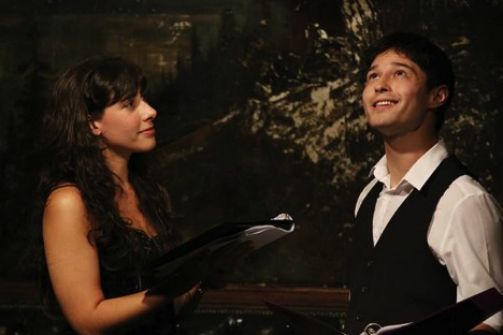 BOTTOM LINE: An experimental and three-dimensional immersion into failed relationships.

Hand Grenades follows the love affair of Ophelia (Elizabeth Gray) and Diana (Kristina Mueller), two women who happen to have an awkward first date in a coffee shop, complicated by a seemingly unimportant waiter named Troy (Chris Fayne). Both relatable and adorably awkward, these women struggle through their first conversations and spin into an elaborate relationship, conveyed through different vignettes based on the number of days they have loved each other, with Troy acting as a narrator. These days are filled with loss, tragedy, and infidelity, yet are still looked at through the lens of a persevering love. Later, the tides turn and Ophelia narrates Troy and Diana’s story.

Because the play jumps between different relationship moments, much like the movie 500 Days of Summer, story and most plot points are conveyed through narration. The narrator (Troy or Ophelia, depending) conveys both the character’s inner thoughts and fills audiences in on experiences between vignettes, allowing an omniscient three-dimensional look into the relationships. However, because of the narrational shifts and time jumps, a lot of information is lost in translation and requires an audience effort to piece the story together.

This play calls into question the true nature of love, and allows the audience to ask whether it’s practiced or fated. It also reveals the dangers and pain in one-sided love, and asks if there can truly be completely equal love within a relationship. Its experimental nature and almost barren set aids this point by pulling the audience out of typical “well made theater” reality, and leaving much to the imagination.

The title alludes to the phrase, “almost only counts in horseshoes and hand grenades” (or “horseshoes and nuclear war,” depending on which character is asked). This phrase becomes a running joke for the women as they dispute this on their first date, yet this device cleverly calls into question the benefit of language and how such a small dispute can foreshadow the demise of a relationship and simultaneously mean nothing at all.