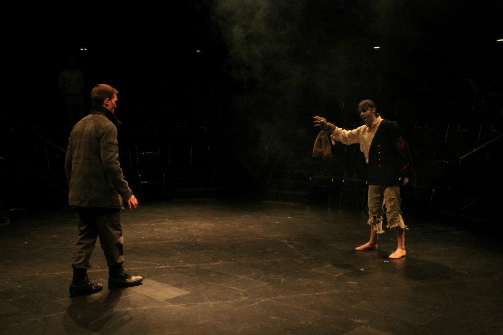 Tucker Delaney-Winn and Emily Pantalone in Hamlet the Hip-Hopera. Photo by Laurie Rabin.

BOTTOM LINE: Hamlet the Hip-Hopera, while not perfect, infuses Shakespeare with a new energy and makes the play accessible to audiences who might be intimidated or put-off by Shakespeare.

Marshall Mathers meet William Shakespeare. Hamlet—Shakespeare’s tale of a young prince who must avenge his father’s death— is a perfect fit with the hip-hop music genre. Hamlet’s mourning over the death of his father and anger towards his stepfather are themes entirely at home on an Eminem or Kanye West album. Tucker Delaney-Winn’s Hamlet the Hip-Hopera, while not perfect, modernizes Hamlet for new audiences, adding energy and excitement to the well known story.

The play begins as anyone who has seen Hamlet before would expect— a dark stage as Bernardo (Virginia Hamilton) and Marcellus (James Sawyer) stand their watch on the battlements of Elsinore speaking in traditional Elizabethan language. However, as Horatio (Alexander Haynes) enters, Shakespeare’s lines are nicely blended with modernized speech and a sprinkling of scatological humor. While a Shakespeare purist may cringe to hear the bard’s words distorted in such a way, Delaney-Winn’s modernizations help clarify the plot and dust off some of the ancient metaphors. These adaptations make the play accessible to high school students and audiences who might otherwise be disinterested in Shakespeare. While many modern language adaptations of Shakespeare feel stiff and stodgy, here the adaptation feels natural and transitions nicely between the traditional language and the hip-hop songs.

The songs themselves, though, often leave something to be desired. While some have clever lyrics and work well with the plot, as the play progresses many of them begin to sound the same and tend to diffuse the dramatic energy rather than build it to it’s tragic conclusion. As a result, the audience (and the actors, for that matter) have difficulty connecting to the emotions that drive the play. For example, when Hamlet (played by Delaney-Winn) goes to visit his mother Gertrude (Kimberlee Walker) in her bedchamber, the music seems to muddy the dramatic action, diluting the connection between the actors, and weakening what should be a powerhouse scene. Similarly, the ultimate duel between Hamlet and Laertes (Mark Ryan Anderson), which in this conception one might expect to be an epic rap battle in the style of 8 Mile, is scattered and fizzles out. Overall, the concept and ideas are well founded but still need a little tightening.

Hamilton and Sawyer give stand out performances as the dynamic duo Rosencrantz and Guildenstern (in addition to various ensemble roles), providing energy and humor; while Steven Bono Jr. provides an eerie performance as the ghost of Hamlet’s father. However, the highlight performance for me was Jessie Cannizzaro who captures the angelic Ophelia with such grace and delicacy. Cannizzaro’s voice floats above the music and commands attention, especially in her confrontation with Hamlet in the “nunnery” scene.

As Lin-Manuel Miranda continues to change the face of Broadway with his own hip-hop musicals (In the Heights, Hamilton), Hamlet the Hip-Hopera contributes to an exciting time in New York theatre. As this piece continues to grow and develop it will reach out and bring new audiences not only to the work of Shakespeare, but to the theatre as a whole.