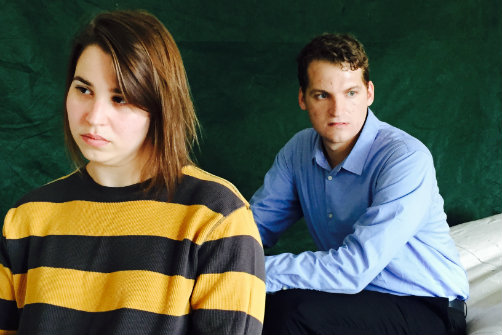 Amy Scanlon and Malcolm Nicholas in For Now. Photo by Anne Stewart.

“Human beings need human interaction” is stated, revisited, and questioned in Jeremy Stuart’s For Now. Intentionally left vague, the play opens with two people, only known as Man (Malcolm Nicholas) and Woman (Amy Scanlon) in the throes of an orgasm. Lights up. Clad only in underwear we learn they’ve just met. Perhaps a Tinder “date” of some kind. It’s the Woman’s house and she seems a little lost in depression. The Man seems to have a relationship elsewhere. There are discussions of fantasy and the happy, idyllic nonsense they make up in our heads.

The Man goes to work. A few days pass and the Woman gets further lost in her depression, removing all clocks in an effort to see what it would be like without them. He’s sorry for being late and she replies, “are you?” The forlorn, love-seeking talk continues, eventually ending up right back where we started, clothes off and coitus beginning.

At a lean thirty minutes, For Now feels like the beginning of an idea. Nicholas and Scanlon turn in convincing performances that feel strained with poetry, hungry for some substantive dialogue. Stuart, also the director, is able to uniquely use all of 64E4 UNDERGROUND's weird little room in unexpected and simple ways. I long for a similar resourcefulness of playwriting to extend the brief, fleeting For Now into a fully tangible piece.