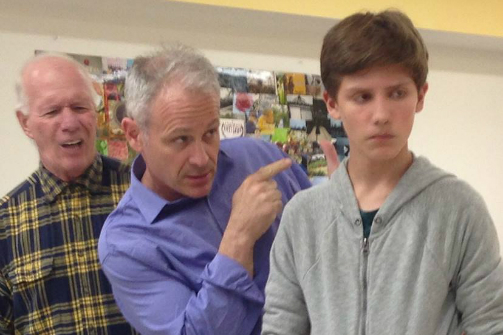 BOTTOM LINE: An earnest dramedy centered on three generations of men in one family.

Zack Friedman’s new dramedy, Fathers & Sons, is at its core a play about communication—both in its ease and difficulty between ourselves and the ones we love. We observe three generations of the same family, forced to live together at what might be the most critical moments of their lives. At the center, we see Al Marshall (Doug Willen), our story’s main character, a father desperately trying to assemble a new life for himself after divorcing his wife while balancing an increasingly more intense relationship with his ailing father, Pop (Robert Sean Miller). Throw into the family powder keg Al’s teenage son Adam (Andrew Chamberlain), and you have the delicate familiar unit that makes up this ensemble. Each character brings into the show their own personal struggles—Al is still dealing with the fallout from being divorced, Pop is slipping faster and faster into what appears to be Alzheimer’s, and Adam rebels against his less than normal life at home by acting out in just about every way at school. Al tries both successfully and unsuccessfully to be the glue that holds all of this together.

Ironically enough, for being a play about communication, the production has a few missteps in complete connection. Al is a middle-aged PR rep who can talk to just about anyone save his own father and son, but believability is an issue with Willen. I couldn’t help but feel alienated by how, in the writing of the piece, Al appears to remain in control of his emotions throughout the course of the show, despite the incredibly high stakes at hand. I wish we saw more emotional complexity from Adam, helping us connect with his character’s struggle. Miller is the true hero in this piece, as Pop. From the moment we meet Pop, we are introduced to an instantly likeable presence onstage. He brings to the role an honest connection to the character’s words. Detailed work on Pop’s character can be observed—from the way we see in his eyes a genuine search for clarity in an ever-clouding mind, to the physical distinction he makes in his body between scenes that exist in the past and ones that exist in the present.

Clever technical components found in the lighting by Tyler M. Perry and sound by Stephen Cedars, combined with a solid script penned by Friedman, work together to produce a congruent piece of theatre.