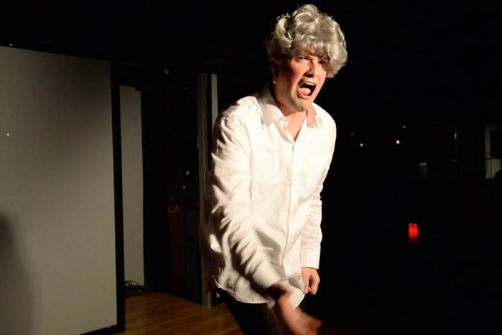 As the daughter of a funeral director who grew up in a funeral home, I am not a person who easily gets choked up when famous people I have never met die. But when Elaine Stritch passed away in summer 2014, I was devastated. So in honor of her memory, I will spare you the adjectives, and just spit it out.

It's December 30th, 2001, the last performance of Stritch’s Tony-Award winning one-woman show, At Liberty. Malsky embodies the sheer power of Elaine Stritch, the unmatched queen in full command of the stage.

Then we skip ahead 10 years. Malsky merely grabs a small black purse, slips a hat on his head, and enters again as Stritch. Ten long years weigh heavy on her frail frame, her boney knees weak in the same black tights as she clings to the Steinway piano in her rehearsal room at the Carlyle Hotel with her loyal music director, Rob Bowman (Keith Rubin), accompanying her as she struggles to remember the lyrics of "Rose’s Turn" from Gypsy.

In the loft of the Spectrum Theatre, the audience sits in rows of cozy couches, as if we were in the privacy of our own homes. Malsky is so close you can see Elaine’s hands visibly shake, sweat pouring down her face. She is human. Malsky exposes the unforgiving ephemeral nature of the theater.