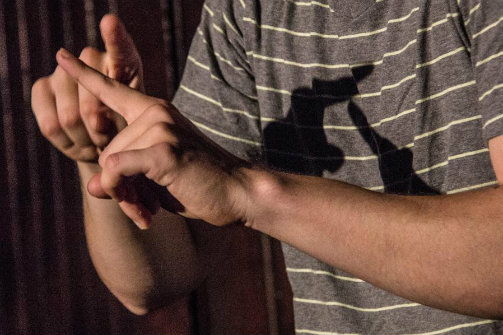 BOTTOM LINE: Growing up is hard, especially when both your parents are Deaf and you can hear.

In CODA (Children of Deaf Adults) we witness a child of Deaf parents struggling to find his place in his family and the frustrations of not being able to communicate fully. Written and performed by Mark Murray, we learn about Mark’s over-controlling father and his mother who is all but absent. These could be characteristics of any parent, yet by being Deaf, they are amplified. Mark hears it all way too loud and clear.

As Mark switches from being a narrator to different characters in his life (a little boy version of himself, his own father and mother, a cop, a mean bully, his girlfriend) he tells us of his deep loneliness: “We don’t talk about ourselves in our family.” Having no brothers or sisters, he feels as if he is a stranger in his own home, yet he complains how his parents (mostly his father) are “helicopter” parents, never leaving him alone. He fiercely defends his parents and also constantly calls them out. Ultimately, he doesn’t know who he is or where to find his place in the world. Is he just a hearing child in a Deaf household? What else?

Directed by Lindsey Leonard, the stories are passionately told with Mark switching in and out of American Sign Language. We get a glimpse into the type of communication he grew up with and the two worlds he inhabits. Mark shares some people’s perception of the Deaf Community: people are inappropriate and rude, confused and scared; others just flat out ignore his parents. The treatment his parents receive seems to be one of the biggest struggles for Mark. His father didn’t even learn sign language until he was 18 years old—everyone around him was too busy trying to “normalize” him. If nothing else, he reveals a world that people might not know about. A world that is normal to him, but intriguing to others.

Were his parents not Deaf, this piece would lack weight. However, his parents are Deaf and that makes his family and their relationships unique. It takes him a while to figure it out, but he does find his place. He has two cultures and two communities: Deaf and Hearing. Now he proudly admits he is a CODA: A Child of Deaf Parents. And that’s exactly where he wants to be.