By Leo I. Rodriguez; Directed by Steve Velardi
Produced by Prophecy Productions
Part of the 2015 New York International Fringe Festival 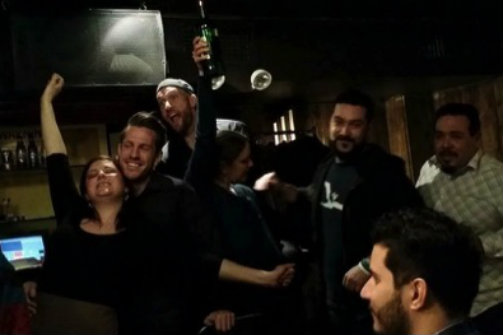 BOTTOM LINE: A light, relatable musical for a night out with friends.

Creatively turning the theatrical space on its head, the bar at the back of Drom becomes the Broken Moments stage, making the audience feel as though they have gone to the bar with the kooky cast of characters including “staff” (Leo Rodriguez, Elizabeth Pryce Davies, and Benjamin Horen) and customers, either “regulars” or “celebrators” (Katherine E. Sulenski, Emily Battles, Michael Longo, Jeffrey Michael Aiken, Sean Griffin, Cleo Antolin, Joseph Rivera, Noah Erin Fleischaker, Jessica Sarah Bennett, and Jasmine Spiess).

This musical begins in the bar Broken Moments, celebrating the life of its recently deceased owner. As the night progresses drama is rehashed and created, vulnerability is exposed, and chaos ensues as a birthday party and bachelorette party enter—not too far from the true nightly NYC dive bar experiences. The first half of the show contains a lot of expositional songs introducing characters, explaining their various romantic histories, and describing the night the owner died; the song length and tendency to jump from one unresolved conflict to another makes it difficult for the piece to fully capture attention.

However, upon entering the “bachelorette party,” Bennett and Spiess steal the show with their hilariously accurate portrayals and desire to involve the entire bar in their pre-wedding shenanigans. The truthfulness of their acting refreshingly allows their characters to be viewed affectionately as real women rather than “drunk girl” caricatures, making their comedy all the more effective. From this point forward, the loose ends of the story tie up with hilarious yet heartfelt songs, such as “You Gotta Believe” and “All About Love." The vocal talent, jazzy riffs, and seamless choral blend make these songs compelling and effective, drawing audiences back in.

Though a bit too long, Broken Moments truly immerses its viewers in a complex night of love, pain, and celebration, setting them up perfectly for their own night to come.